Let's go for a walk.

Good morning. I was going to put this out last night, but Oscar had other ideas. He has been in the habit of coming into the house early evening, scoffing his dinner, then demanding to be cuddled. I put a small pet bed quilt in front of me on the desk so I can carry on with what I want to do on the computer. This renders my left arm useless as he lays across it. Typing with one hand takes ages so I gave up. At 10pm he decides he wants to go out, but by that time I am too tired to do anything.
It started off raining yesterday morning, but brightened up a bit later on. I got my arse into gear, had an early lunch, packed a snack for later, and went off in the car to look for pastures new to explore.
I have been to Haxey before, as my well worn map shows, but there are some paths I have yet to mark off as 'done'. I parked in the designated dropping off point for the school, a side road which isn't in use on a Sunday. Two others had done the same.
Walking into Haxey the huge church stands proud in all it's splendour. For such a small village it sure is a massive building. The grounds are beautifully kept, the grass is manicured and the borders around the edge of the building are planted out with a mixture of flowers and small shrubs. 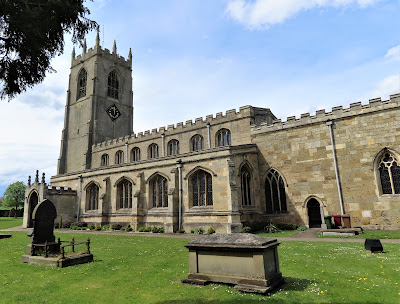 I would have liked to spend a few minutes inside, but as with most churches these days it was locked. 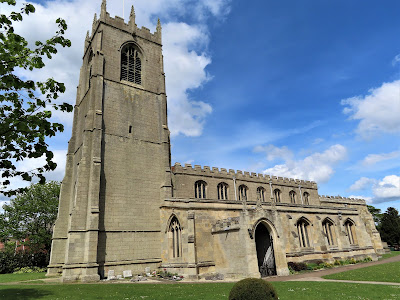 At the back of the church is a path leading to the graveyard. I will take a few minutes wandering around there, and sit on a bench. 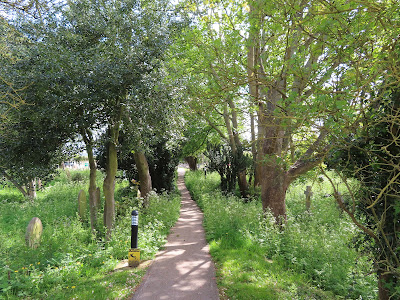 As you can see it has turned into a gloriously sunny day. 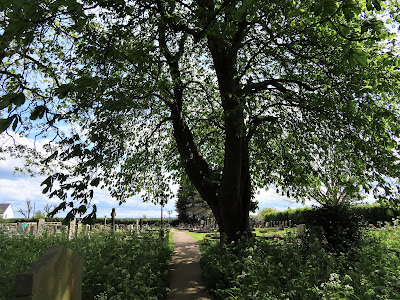 This grave caught my attention. All nicely decorated with pretty colours. Very girly. On reading the headstone it is for a baby who lived for only two days. It brought tears to my eyes. Someone has been coming here for the last seven years to keep this tidy. As I sat on the bench a mum with two young children and a dog came into the graveyard. They went straight to it, hesitated for a minute or two, then left by the other exit. I wonder if that was their daily ritual. 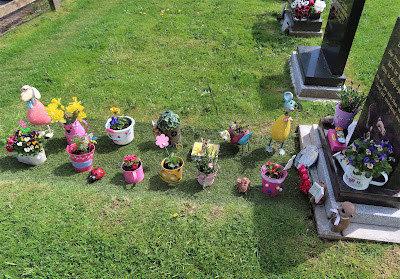 The sky was by now clouding over, and the air was quite muggy and warm. I started off with a jacket in the rucksack, just in case, but didn't need it. 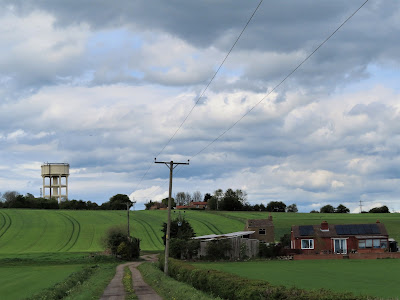 I crossed Warping Drain, and a railway line, and headed towards the river. A lady caught up with me, going in the same direction, her dog was very keen to keep going at a fairly brisk pace. We walked together for a short time, it was nice to have a chat. We parted at a junction and there was a brief chat further on with a couple walking their two dogs, one very big and one very small.
I could hear a strange cracking noise as I got close to the river, it became louder as I walked towards it. Sounds like a gun. I hope I was not going to come across someone shooting at animals. I reached the river and saw a man crouching on the opposite bank. I was relieved to see he had a target set up and was aiming for that. 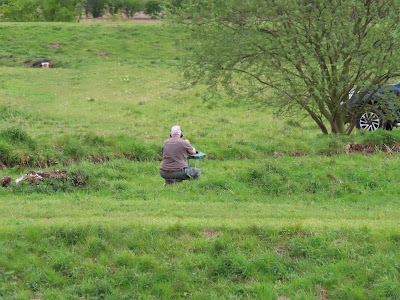 The River Idle is not very wide. I walked alongside it for a while. Then it was time to head back by a different route. There wasn't a designated footpath, I walked along the verge between two fields and came out on a road. 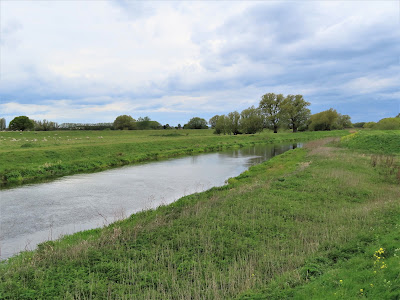 I crossed back over the railway line, and Warping Drain, by this footbridge. 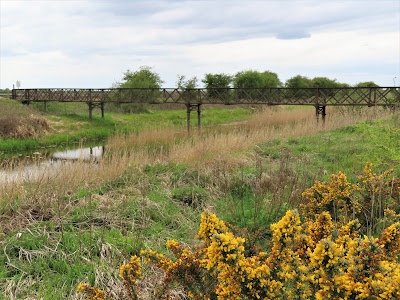 The track then took me into the village of Westwoodside, Amazingly I happened to come across the dog walking lady again. That was a coincidence. I got to meet her rather nice husband as well.
From there it was just a matter of walking from Westwoodside back to Haxey along the road. Clouds were looming and I hoped I would be lucky. Not so, it bucketed it down. I didn't bother to get the jacket out, I would have got soaked just putting it on. The brolly was handy so that would have to do. I was fine, The rain was coming from behind and I marched on. It was a shower so no harm done.
I nice afternoon out and seven and a half miles walked. I need to do some work in the garden today, and maybe make a start on the five shopping bags I cut out yesterday. Plenty to do. Thanks for popping in. Toodle pip.   ilona
Posted by Meanqueen at 09:17