A look at the inside

It doesn't seem that long since we hit 2000, and here we are ten years later, it's frightening, is the universe whizzing out of control? I seem to have slowed down, and the world is spinning faster, whoa put the brakes on.
The first day of a new decade, and a time for reflection. What better place to get lost inside ones own head, than strolling through the woods and fields of our wonderful countryside. There was a dusting of snow overnight which glistened in the morning sun. I decided to start the new year as I mean to go on, and not waste any opportunity to get out walking.
I set off, out of the door, round the back of the church, down the hill, through the gate, across the field to the fishing pond, and on to the river bank. The pond is frozen over, no one fishing and no ducks or swans, I wonder where they have all gone. 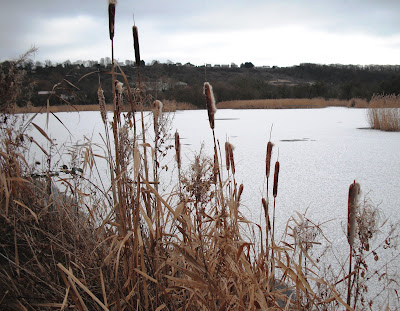 Picking my way round hundreds of mole hills along the river bank, I could hear the church bells ringing out welcoming everyone to the midday service. Overhead a gaggle of geese were chattering away as they flapped their wings in formation, soon out of sight and on their way.
This is the area where they want to put some wind turbines which is upsetting a lot of people in the village. Up to now I haven't been drawn into that arguement and I think it's best not to let my feelings be known. Once they are up and running I don't think they look too bad, don't tell anyone I said that. I reached Flixborough and skirted round the edge of the industrial estate to join the path that runs along the bottom of the wood, and back home. By this time the sun had disappeared, the sky darkened and a few flakes of snow were falling. 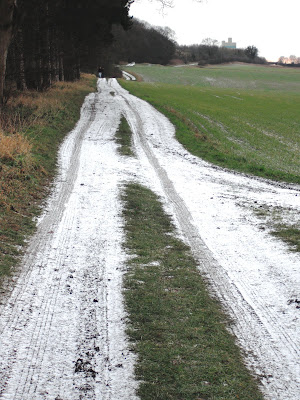 I came across this chappie in the middle of a field, looks like he has plenty of time to contemplate a new year out in all weathers. Behind me is the wood, and a long way in the distance is the river bank. 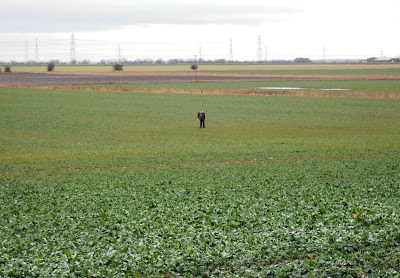 What was the outcome of all my reflecting? Overall 2009 hasn't been too bad for me, although the first five months when I was on the dole wasn't very pleasant. Being patronised and made to feel like a scrounger was soul destroying. It was only when I stopped looking for work that did not exist, and concentrate on just getting through each week living on very little income, I began to relax and enjoy myself. Freeing yourself from the shackles of earning money takes a weight off your shoulders. Having no money means you don't need to think about spending it, freeing up time to do other things.
Once I became a pensioner it was plain sailing, so as long as the government keep on paying what they owe me, then I will have a wonderful life. I am not sure what 2010 will bring, it's still at the planning stage, but I am sure that I will make the most of it. I want to do more walking, longer distances if my health holds out. I want to keep busy busy busy, grabbing opportunities when they arise. Not waiting for things to happen but making them happen.
I have just been watching 'An Englishman in America', the last part of the life of Quentin Crisp, I love his philosophy. John Hurt played the part perfectly. In his last stage appearance, in Tampa Florida, Quentin finished with this gem. 'If there is anything that you want, don't look on the outside. Look on the inside to see if there's anything you haven't unpacked'. Love it.
Posted by Meanqueen at 16:42