Hello. Nothing done in the garden today, it was too darn cold. Instead I have spent some money in a small Garden Centre. I don't like the big ones, they have too many add on's, loads of stuff for sale that have nothing to do with gardens. I don't want a drink in a coffee shop, or to buy anything for the house.
This small one is a family affair, they live in the house next door, and grow their own in massive greenhouses. I prefer this set up because I can ask questions and they are really helpful. I know very little about flowers, can't remember any names, so it's a case of suck it and see for me.
Janet came with me but wasn't tempted to buy anything, she already has a well stocked garden. I however spent £28 on these plants. Not a lot really for four beds, but mixed in with a few plants I have in pots, and some seeds I bought in the £1 shop, I should have enough. I can always top it up later on if I come across some bargains. 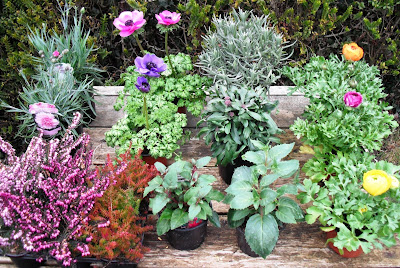 These are what I bought a few weeks back from the £1 shop. The 50 bumper pack is the same as I had last year, I planted them in five tubs, there is such a lot for £1. 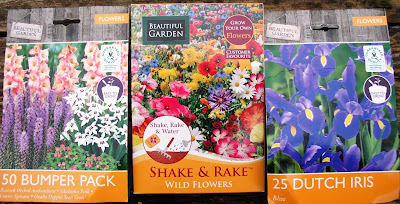 These multi pack seeds are also £1 each, let's see what we get from them this summer. Worth a try. 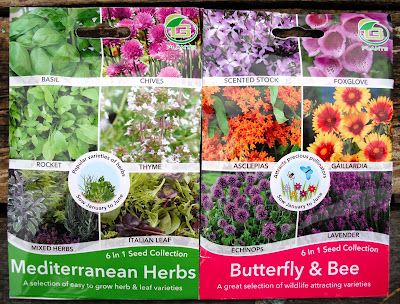 I did two jobs in one journey and took another load to the tip. I couldn't resist having a nose in a woman's car to see what she was throwing away. Nothing exciting, a lot of crockery oddments. I asked her if she takes anything to charity shops, she said she didn't have time.

Of course there was the usual visit to the small Tesco as we were passing, I got a bit lucky, four packs of mixed prepared veg at 15p per bag, which I am eating now, and a cheap melon, and reduced mushrooms. Always worth a look.

I had a phone call tonight from a journalist wanting to write a story about me for a magazine. This was on the cards ages ago, but didn't go ahead. I thought it was because I refused to sign an exclusivity contract. I could hardly hear what she was saying, she spoke all breathless and feathery if you know what I mean. I decided not to bother, the moment has past now, it is history.

What did you think of the Jo Brand Documentary? It was interesting to see how she got on after I left her. I'm not sure if they followed the Trans Pennine Trail to the letter, but some of it was grueling, and she was struggling. I don't know if it has given any other middle aged over weight ladies inspiration to have a go. I would imagine it has put quite a few off. She did it at the wrong time of the year, but I don't suppose she had any choice in the matter. At least she got off her bum and did it.

For those who haven't see it, here is the documentary. You catch a glimpse of me following her as she goes over the bridge, three minutes into it. I have a speaking part at four minutes. It's available for 29 days on iplayer, after that it might turn up on yoootoooob. I'm not sure if our oversees readers can get it.

We are at the weekend again, time flies, make the most of it. I hope you have a good one. We'll catch up soon.
Toodle pip

Comments are welcome. If you are labelled as 'Unknown' please include your name in the text. Thank you.