Would you like tea or coffee? I have both ;o)

Hello. I'm a bit stuffed, I've just eaten a plate of steamed veggies, going to have to let that go down a bit before I do my walk. How has the day gone then? Well, I cleaned the house, made it look respectable, picked up the newspapers lying around Bugsy's bed, and moved the litter boxes to just outside the back door. Can't move them too far away or the kitties won't find them. I blitzed the kitchen, scrubbed the bathroom, Dysoned the carpets, and dusted the dusty bits.
My visitors arrived just as I put the duster away. Not a real duster, a home made one out of an old sheet. They are coffee drinkers so I didn't use any of the five tea bags I have in the cupboard. It was just a drop in on their way home, an hour and three quarters later after a look at the summer house, they were on their way.
They had had a big breakfast and didn't want any food, but I was ready for my lunch. As soon as they were gone I was tucking in. Two boiled eggs, served on a bed of rocket, with tomato, chick peas, and pickled onions. Very nice. 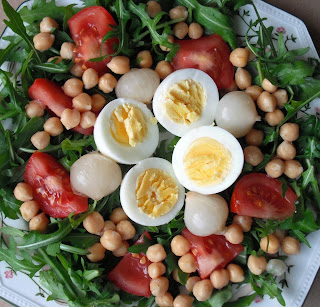 It's been a gloriously warm and sunny day here. After a Rocky walk I loaded the car up with the scrap pallets and took them to the council dump. It's a big yard with big skips around the perimeter, each one is labelled saying what you can put in it. The man keeps it clean and tidy, he has been working there a long time. They have spent a lot of money installing new steps up to the platforms between the skips where you throw things over the side. Quite a good set up, not like throwing it in from ground level, makes the job easy.
I checked Tesco, Co op, and Spar shop on the way back for any reductions. Got a few items at the first two, but nothing at the Spar. How to get the last bit of tartare sauce out of the jar. Stick the food in there on the end of a fork and wipe it round. This jar was out of date in October last year, it only cost 20p. 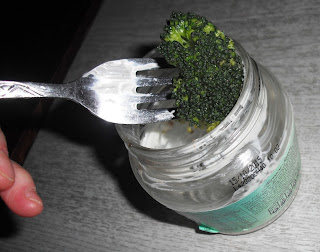 I'm pleased to say that Mila, who has been wandering through the whole blog has at last caught us up, so welcome Mila. Well done, a round of applause for her, she must be knackered, ha ha.

Now we are coming into the weekend again. I hope the weather is nice tomorrow I have work to do in the garden. Whatever you are doing, don't spend too much money, save a bit for another day.

Thank you for popping in, now I must go for a walk. I have just cracked the 200 miles, but I see that several of you are ahead of me. I am working on 250 miles in three months, so another 50 by the end of March should be easy. We'll catch up soon.
Toodle pip
Posted by Meanqueen at 19:55