Hello. Another garden day today, aren't we lucky with the sunshine. The next raised bed to be given a  makeover is this one. I forgot to take a photo before I removed the rotten pallets. It's not very big and always had the runner beans growing here in the corner, sheltered by hedges on two sides. Should be an easy job, should have it finished today. 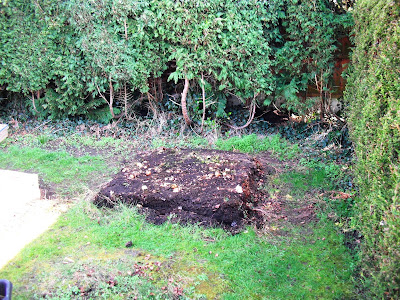 I soon got a sweat on with the digging and took a layer off. Heidi has found it on the table in the summer house. She does like to lie on my clothes, especially as it means snoozing in the sun as well. 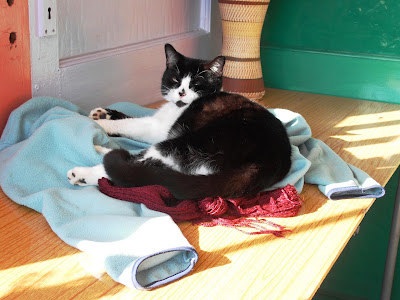 I brought Rocky's spare bed outside. He lay watching me as I cursed and swore at the roots I found under the compost. 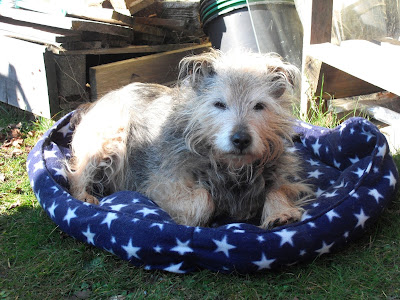 Bugsy moves up the garden to stay in the sunshine. He got off the towel and lay in the hedge bottom, then he moves up onto the decking. Eventually going back into the house to lie in the front window sill. He's not daft. 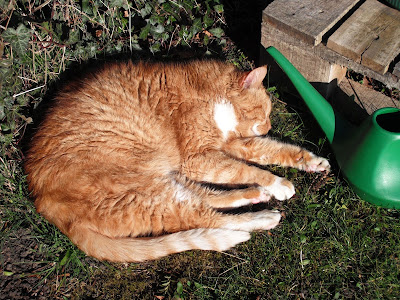 Mayze is peering out of the summer house watching me huffing and puffing pulling the roots up. 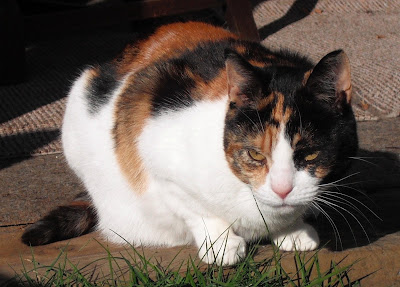 And this is how it finished at 5pm. A big pile of roots, I suspect they come from the surrounding hedges. I was in two minds whether to build a raised bed here or leave it flat. The ground has a slope on it so I have spread the compost about to try and level it. I have got enough bricks so I think I might put one in as it looks a bit bare. I don't want to plant anything too tall in the space because I have to get a stepladder alongside the hedges to cut them in the summer. 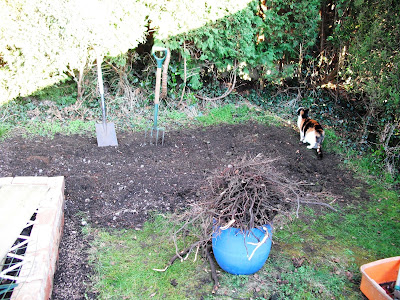 I'm feeling a bit knackered now, those roots were a pig to get out. I feel like I have done a three hour work out at the gym, the muscles in my legs are aching with all the bending down and pulling. I had to use the loppers to cut some of them off. They were too big and too deep to remove with my hands after loosening them with a fork. I could have done with a JCB, ha ha.

I've had my dinner and don't know if I can get off my chair. Now I have to decide if I can manage a walk or not. I'll make a drink first, then decide. Tomorrow I'm going to the small garden centre to see what plants they have. Janet is coming with me. We pass the tip so I'll load the car up and chuck a load of pallets in the skip on the way through. I put a notice up on the front gate this morning, free firewood, but no takers.

Thanks for popping in. We'll catch up soon. Toodle pip.

Adding a PS. I did get up off my bum and walk. Just come back and collapsed in a chair. Now I am really knackered. Ha ha.

PPS. My sister has just rung, she says I am on the Jo Brand documentary.

PPPS Carol, the links to my long walk work now, I have fixed it.  Thanks for letting me know about it.
Posted by Meanqueen at 19:01