Hello. Today magic happened. There was I cleaning up the stack of bricks I had managed to scrounge, thinking I hadn't got enough and still needed more, when my friend Helen (not doggy Helen, another Helen), came round and told me there are 100 bricks going free for collection. Someone she knows is knocking an outhouse down and they want to get rid of the bricks. If I went straight away I could have them. I dropped my tools and went. 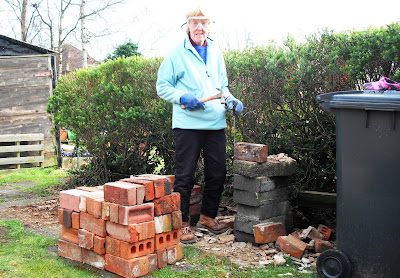 When I got there, it was only three streets away, I found three guys dismantling the brickwork and they were chipping the cement off as they removed them. How wonderful is that, clean bricks no work for me. They loaded 100 onto a trolley and pulled it out into the street and loaded up my car. They then asked if I wanted some more because they had plenty. I thought 100 was enough for one trip, don't want to bust a spring, so I went back for the second load. Then they asked if I wanted more, so I am going back in the morning for a third load. 200 bricks stacked behind the garage, more to come. That's the magic of living in a village when everyone knows somebody who might be able to help. 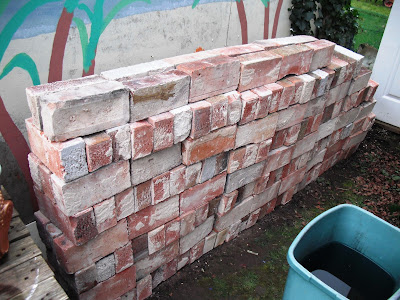 This is the next raised bed to be dismantled, it's the one next to the summer house. All the wood will have to go. It's served it's purpose when I built it seven years ago, the pallets were the only free wood I could get, now I am going to replace it with free bricks. I like free. 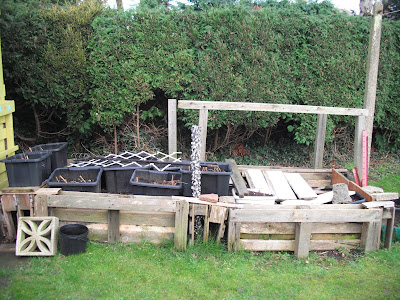 I've just watched the last Mr Selfridge, it was a sad ending when he had to leave the store. Happy that he got his woman though. Lucky Katherine Kelly got to snog Jeremy Piven.

I had a long chat this morning with my computer man Mark, he rang from Australia. He posted a picture on his Facebook page standing next to a truck, he is a volunteer fireman and they put him through his training and test so now he has a truck licence. He is coming on leaps and bounds since he moved out there, he is making a good life for his family.

That's me done for a Saturday night. I'll get off my bum now and do my three miles. Enjoy your Sunday, I hope we have good weather like today. We'll catch up soon. Toodle pip.
Posted by Meanqueen at 19:28