Cherry picking around the shops.

Hello. Thank you for your tales of decluttering. I went to town today and took a bag of clothes, an atlas,  and a pair of boots to the Age Uk shop. I also had a table lamp to get rid of but they can't take electricals so I had to traipse up the High Street to the British Heart Foundation shop. They are the only shop that takes them because they have the authority to test them to PAT (Portable Appliance Testing), standards.
I took trolley to town because I had a lot of shopping to do. I had almost run out of cat food so I did the rounds of the discount stores. I picked a few things up from the Cash and Carry on the way in, cream crackers 25p, Ribena squash 60p, linseeds 30p, and a 500grm block of cheddar cheese for £2.50. I called in Aldi on the way back. Baby potatoes 59p, broccoli 37p, butter 75p, eggs 79p, multigrain loaf 85p. quiche £1.19, walnuts £1.29p. 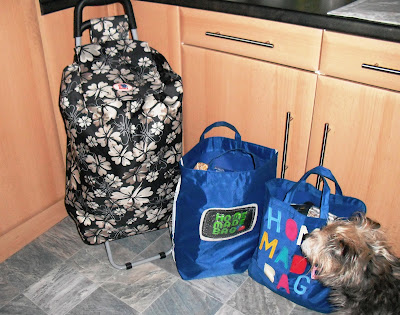 I got some Danish Blue cheese last week from a freezer shop called Fultons, I rarely go in there. Last week the cheese was 50p, this week it had gone down to 35p. A bargain. Wilco have got 12 Felix pouched for £2.50, that's about as cheap as you can get them. I got some Gourmet Mon Petit on offer at £1.25, for Heidi, she likes that. I have never tried Wilko's own brand cat and dog food in pouches so I bought some to see if they like it. Bugsy likes Felix As Good As It Looks so I got a box of that from B & M for £3.29. The tuna was only 39p a tin so I got some of that for the kids. I like to treat them once in a while. I got Rocky's doggy treats from Home Bargains, he loves chicken jerky fillets and chicken rice dumb bells.

The credit card statement came yesterday so I paid that into the bank today. There was only one item on it, I have been curbing my spending. On checking the bank balance it's creeping back up again after the large bills for the car, and a new fridge have been paid for. It's amazing how quickly it recovers after a hammering.
I got an hours digging in today, though the weather has not been as good as yesterday. I did my walk earlier so no need to go out tonight.

I'll sign off now and have an early night. Thanks for popping in. We'll catch up soon.
Toodle pip.