Do you have trouble getting the kids out of bed!

Hello. Thank you for your good wishes regarding Heidi. You can be assured that I will do my best for her. I am coming to terms with the fact that sometimes things happen like this, animals can be born with hereditary conditions just like humans can. She was lucky enough to come into our rescue with her four kittens, I decided to give her a home after the kittens went to their new homes, now it's up to me to look after her .
This is the chaos at tightwad Towers in the morning. I am the first to stir from my bed, but before I can get the coffee on the go, I have to open the back door and let the kids out. As you can see, the place looks a mess. Rocky has been out for a pee, Bugsy had a quick look outside but soon came back in when the white stuff landed on him, he didn't like that, and Mayze couldn't be bothered and stayed where she was.
The newspaper is spread around because Bugsy was prone to bringing up his food. That problem is now solved through a change in diet, with smaller portions and more frequent meals. I leave the paper there just in case of accidents.
Next they demand food, so I serve up a bowl for each of them from the extensive menu available, ha ha. Talk about pampering. I have usually put the bed away by this time, but this morning Mayze absolutely refuses to get up. Bugsy gazes contentedly at the gas fire in the hope of getting a tan. 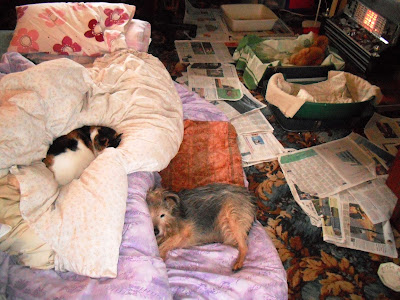 Heidi has decided not to join in with the crowd, preferring the quiet of the kitchen. She is still a bit sad, but hopefully she will pick up a bit once the tablets start to kick in. She was camping out in the bath, but now has found a better place in a basket on the worktop. I have had to move my things out of the way to a different part of the kitchen. 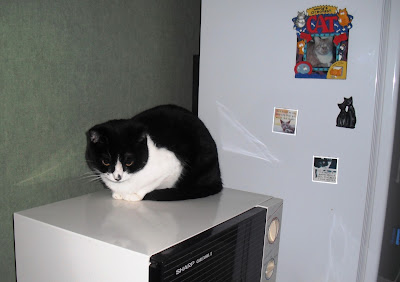 Normally they would all go outside for a mooch round, but none of them fancied it this morning. A quick pee for Rocky and straight back in. Don't like this white stuff. You may not be able to see the flakes falling, at this stage they were quite small. 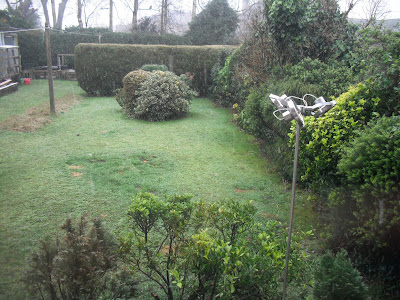 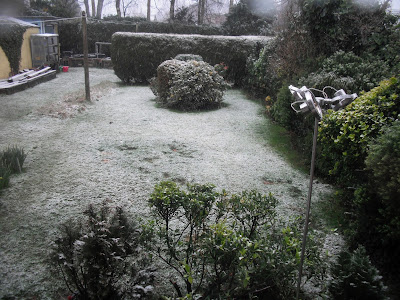 And an hour later......we all decided to stay indoors. 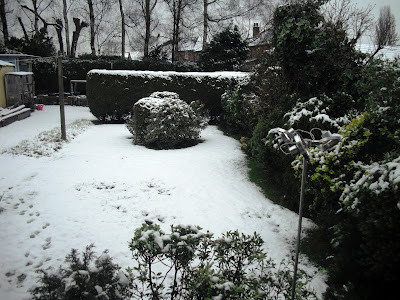 The snow became quite heavy and I thought the best thing I can do is go to the shops and get a few bits of shopping to make sure I have enough in case we are snowed in. I also needed to go to Tesco to take a phone back for a refund. It turns out that I didn't need a new phone after all, I needed a new sim card, which was sent out in the post from Talk Mobile. I had to ring them up and get the number changed back to the old one, the number that everyone else has in their phone. The man was very helpful and that was a success, but I have lost my contact list so now I am asking everyone to text me so I can start a new list.
My lunch today, which I have just scoffed. The boiled eggs and spinach came in a little pot from Tesco, 13p instead of £1.25. I have another one for tomorrow's lunch. Tomatoes were 7p for six, instead of 69p. Two kinds of cheese, not yellow sticker, and couscous which I made yesterday. It was chuffin lovely. 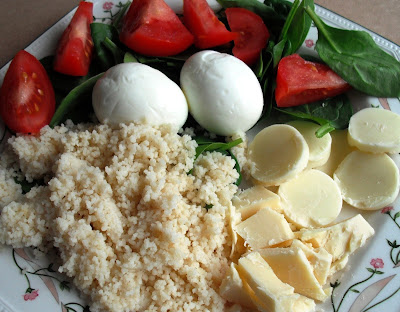 Well the snow has now stopped and it's beginning to melt. I hope we don't get any more. I have been getting on with sewing, the picture is coming along nicely, it shouldn't be too long before it's finished. I am liking the fact that it is smaller than what I usually make, so won't take as much time up. More shopping bags on the production line, using up the roses fabric which was given to me.

I'll get off now, a scruffy little dog is looking at me willing me to get off my bum and take him out. I can't resist that gorgeous face.

Have a nice weekend. Catch up soon. Thanks for popping in.
Toodle pip.
Posted by Meanqueen at 14:42