Another bed is made.

Hello. It's been a lovely day for pottering in the garden. Bugsy loves to sunbathe, I lay an old towel out for him by the back door. It's sheltered from any wind, a smashing little sun trap.. 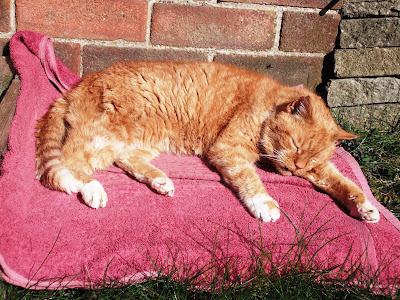 More work on the raised bed next to the sunhouse. I have removed a lot of the compost and shrunk the bed. The first layer of bricks are going down, using a long piece of wood as a guide to a straight line. 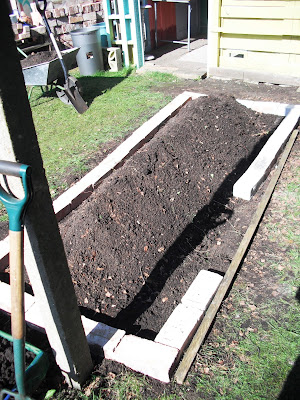 Now it is three bricks high. I leveled the compost, and filled it back up to the height of the bricks, and scattered grass seed around the outside, and forgot to take a photo. I think I am going to have more than enough bricks to do the other two raised beds, so I'm thinking I will remove the collapsed pallet decking and replace it with bricks. There should be enough for that job. I want to get the beds finished first so I can plant them up. I have bought some seeds and bulbs and I might treat myself to some plants from a small garden centre I know. I also have some plants in pots which can be replanted into the beds. Should look good when it's finished. 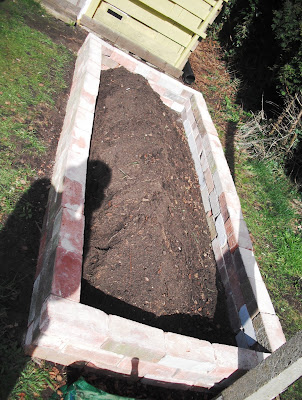 Dinner tonight. I fancied a change from vegetables so I started off a chopped onion in oil, then added some Quorn chunks and sweetcorn, and water. Simmered for 15 minutes. The turmeric has turned it yellow, it's got garlic powder and veg granules in it. Served on a bed of couscous. There's enough for tomorrow as well. 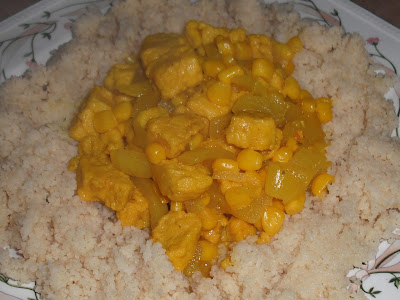 Lets hope the weather holds out for tomorrow so I can get on with the garden. It's nice to be able to stay outdoors for longer. A late walk tonight, waiting ten minutes to let my dinner go down.

Thank you for popping in. We'll catch up soon. Toodle pip
Posted by Meanqueen at 19:29