Hello. This is the state of play tonight with the decking makeover, I've been working on it for most of the afternoon. As you can see it had turned into a pile of wood which needs sorting out, most of it needs chucking. 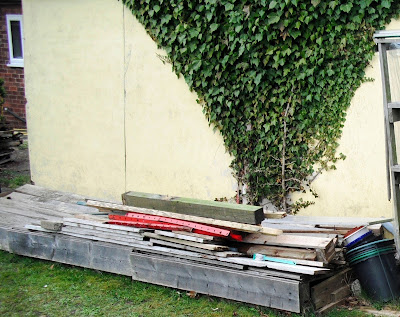 Everything removed and put into piles, some for keeping and most will go to the tip. The underneath was crumbling and had to be bagged up for transportation. Quite a few slugs were stuck to the wet wood and will be relocated to a new home, the skip at the tip. I spotted a small froglet hopping about and was able to catch it and move it to a safe place at the back of the garage. 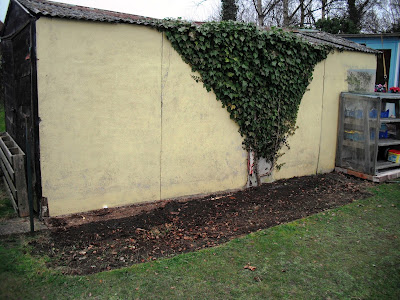 The rubble I accumulated from cleaning up the first lot of bricks came in useful. I used it to level the ground before I covered it in compost. 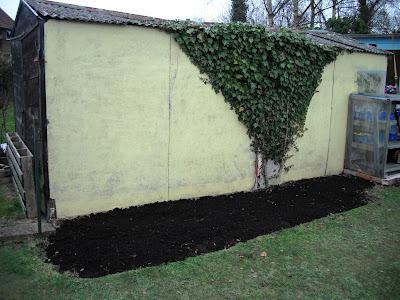 This is as far as I got tonight, I packed up at 5.30pm I was ready for my dinner. I'm not going to take the bricks up to the edge where the decking was, it doesn't need to be that wide. I'll get some grass seed to cover the bare compost. I've put a bubble wrap membrane underneath so the weeds won't come through the cracks. Just got to tidy the edges, and put a couple of pot plants on there and it's done. Looks a whole lot better than the wood pile. 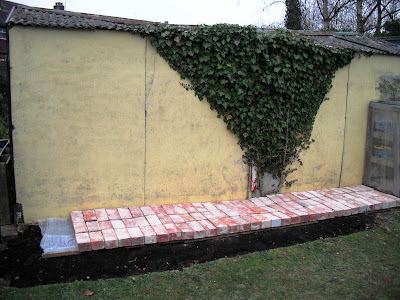 I can't decided whether to do a yellow sticker shop before Easter. Not much in the fridge but there's food in the freezer. Today's lunch was the same as yesterday with the addition of an egg scrambled into it. Dinner tonight was steamed broccoli, cauliflower and potatoes, with a big splodge of mayo on it.

I caught naughty Heidi scratching in a flower bed. I think she was planning on spending a penny but I put a stop to that. She has been by my side in the garden most of the day, watching my every move. You wouldn't think she had been poorly, she is full of mischief now. The tablets are working, and I think she is getting used to the routine of taking one every night.

I spend too much time sitting on this office chair, I'm going to move over to the sofa and relax. Thanks for popping in. We'll catch up soon.
Toodle pip.
Posted by Meanqueen at 19:30