There's a bit more life left in the shelves yet.

Hello. Hope you're not getting too bored with the garden posts, but the sooner I get it done the sooner I can move on to other things. Today the wooden shelving got a makeover. The bottom is rotten so the plan is to saw that off. First I removed everything from it, and tipped it over to lay on it's front. Then I removed the shrink wrap from around it. I think Mayze is stalking Heidi, they are not the best of friends and mainly give each other a wide berth. 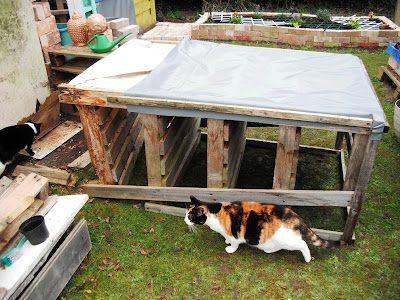 Here we go, the last bit is getting the chop. I've peeled back the plastic backing so I can get at the wood. I knocked a few nails in where some of the joints were a bit loose. 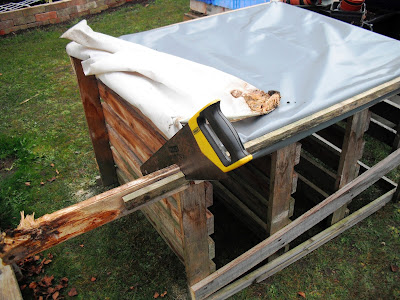 The next thing to do is encase it in fresh shrink wrap. To do this I laid it on it's back and went round and round several times. There is a brick under each corner to raise it off the ground so I can take it right to the edge at the back and front which will keep the rain out. Shrink wrap is like a gigantic roll of cling film, it's very strong. 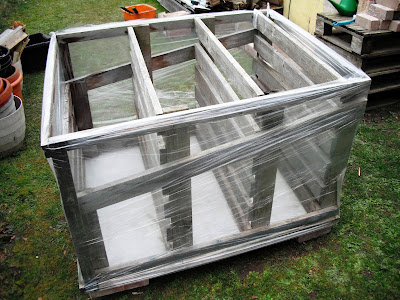 Next I laid out a base of bricks for it to stand on. The ground is not flat so I put some compost underneath to level it. 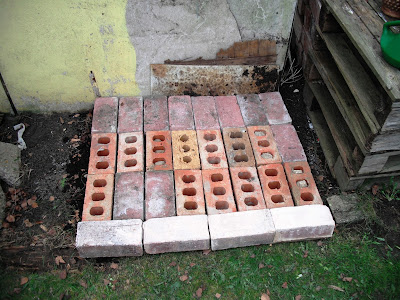 This is the before picture, it's leaning crazily. 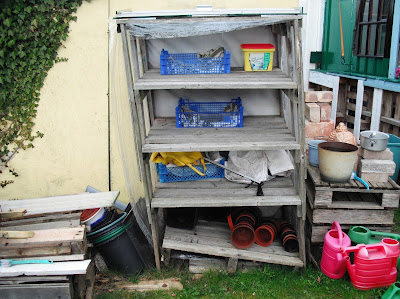 This is the after picture. A bit shorter but much more stable. I now need to paint the garage wall above it to blend it in. I hope I've still got some paint left. I've put some sheets of strong glass on the top, the cats are bound to climb on it so it will stop their claws from tearing it to shreds. Mayze will be happy that her bed is still there. . 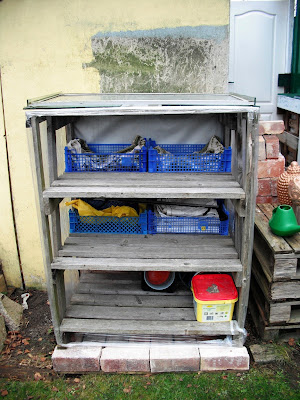 I did a small lunch today, this is on a tea plate. I can't stuff my face in the middle of the day when I have got physical work to do. I needed protein so I zapped a Quorn fillet in the microwave for a few seconds to soften it, then I cut it into pieces and put it in a small pan with a splash of oil. Next I chopped up a couple of spring onions, I find scissors do this job better than a knife, opened a tin of chick peas, half in this, half in the fridge, and washed and cut up four mushrooms. Chuck it all in together with a sprinkle of grated cheddar cheese, and a teaspoon of vegetable granules. Stir while cooking for a few minutes. It was chuffin lovely. You could serve this as a dinner with potatoes, pasta, or rice, or salad. 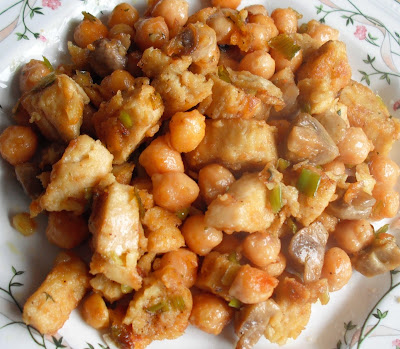 This is why I have a big car, it doubles up as a van. Off to the tip again to get rid of this. 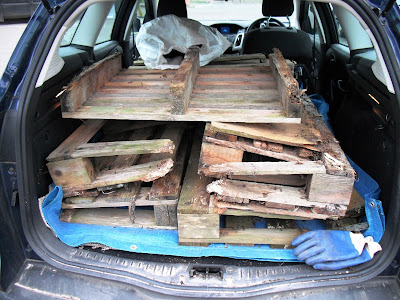 Bit of a climb to lug it up the shiny new steps, but I can manage. They have a non slip surface so not much chance of falling. There is a man to help if anyone turns up with larger items. 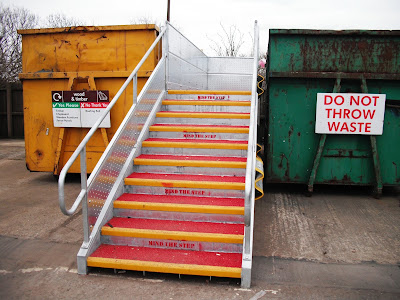 I've had some comments come through from Alison, another enthusiastic new reader who is lost in the bowels of the blog. I'm sure she will turn up here soon, she says she is reading five months of posts daily, so by her reckoning she will have caught up by the summer. She's recently taken early retirement, is de cluttering, and has got the sewing machine out. Sounds like she will fit in just fine here.