I went to a party.

Hello. Well well, it's 22 years to the day when I sat down to dinner with Edwina Currie, at the Lady Truckers Women of Achievement Awards Presentation Dinner Dance. The idea for this event came to me when I saw an article in a transport magazine about an awards ceremony in London for top people in transport. There were twelve photographs in the article and only one women among the suits and ties. I thought it wasn't fair, it should have been more balanced, where were the women?
Only one thing to do, I decided to organize our own awards ceremony for our fantastic Lady Truckers. I wrote to Edwina Curry to tell her of my plans, she lived not far from me although I had never met her. I needed the support of a well know person which would enable me to approach possible sponsors. Edwina wrote back and said she could arrange it for us to have the event in the Terrace Bar at the House of Commons. I was amazed, I would be able to get lots of publicity for our club.
Sadly I had to write back and decline the offer, it wouldn't have been very practical for us, where would the Lady truckers park their trucks? I wrote back and thanked her, and said I had chosen a hotel in Leicestershire and she was very welcome to come. I had a letter back accepting the invitation, whooopeeeee, I was dead chuffed. 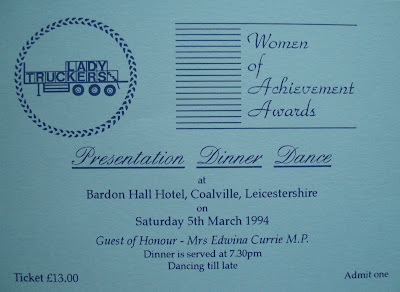 I set about looking for sponsors, I wanted £100 for each of the seven winners in each category, plus a cut glass engraved goblet. The seven runners up were to get £50 each. The day kicked off at 12noon when the ladies began arriving, some of them pulled into the car park in their trucks, their sleeper cabs being their bed for the night. My ex boss at Leicester Heavy Haulage sent his driver with their newest truck to put on display. 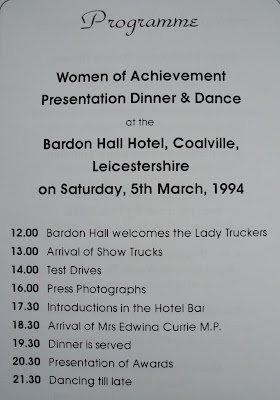 Here are the seven categories that the women could enter for, and the sponsors providing the prizes. The United Road Transport Union were the main sponsors, they paid for the souvenir brochure layout and printing costs. The ladies had to prepare their own entries, produce a folder with any information that might help their bid for a prize. Photographs, certificates, magazine articles, statements from employers and friends. I found four people who held top positions in large national transport firms to judge the entries, and sat round a table with them as they made their choices. 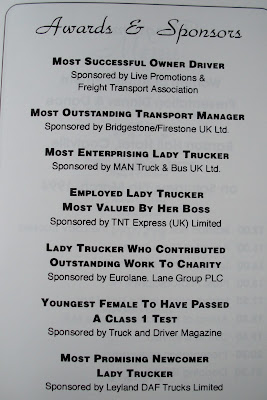 I sold advertising space in the brochure. One of the pages was bought by the company I had learnt to drive a lorry with. J. Coates is still going now, and has expanded to several depots all over the country. I worked for them for a while as an agency driver. 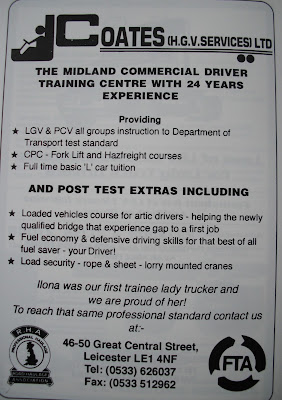 The other people in this photo are the Truckfest Team, Live Promotions. They were very good to us over the years and gave us free space at the truck shows for our club stand. The URTU was also supportive, inviting us to share their marquee when the weather wasn't so good. 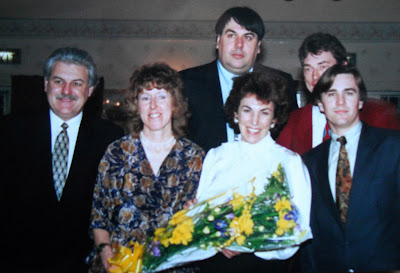 I hired a Radio Derby presenter to be master of ceremonies and announce the winners. A friend of mine made a big cake in the shape of a lorry, and I was presented with a silver engraved tankard as thanks from the members for getting them all together. It was a belting night, one that will stay in my memory forever.

Here are some of our members having a good time at the shows. I remember most of their names, Wendy, Alison, Jenny, Linda, Annette, Anita, Jane, Margaret, Soo, Elizabeth,  and Sarah, 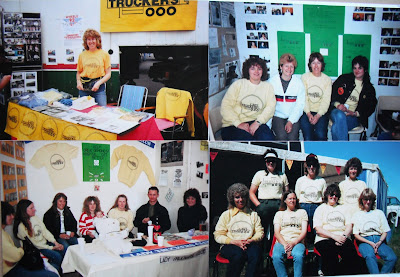 I've still got copies of the magazine articles we were featured in. We were in all the truck magazines, and had a six page article in Marie Claire, the top women's magazine at the time. Local newspapers also printed the story. Just as the media have pestered me over the last few weeks, they also did then. I remember doing several radio interviews, usually going into Radio Derby studios to be linked up down the line. I even spoke to Radio 702 in South Africa. They rang me on my mobile as I was travelling down to Shepton Mallet for a truck show, and I had to go into a truck stop to ask if I could take a call on their landline.

I was so busy at that time promoting the club. I loved my job, and running the club added another dimension to it. I became a campaigner for women in transport, I made a lot of friends, and it also became my social life. I like to take a trip down memory lane sometimes, I have got so many good memories.

It's been dry and sunny today, but oh so cold. The ground is still boggy from the heavy rainfall so I haven't been able to get out into the garden. Shopping bags have been made, and more stitching on the picture. Heidi has perked up a bit, she likes it on the kitchen worktop so I am not going to move her. I have had to move my food preparation elsewhere.

Thank you for popping in, have a good Sunday. Catch up soon. Toodle pip.
Posted by Meanqueen at 19:17