A new jacket, and a confirmation

Hello. A small lamp came home with me a few months back, found at a car boot sale for 20p. There was a box of oddments on the floor so I had a rummage through it. It now has a new look, it was cream coloured pottery, and now has a multicoloured woolly jacket. I started at the bottom with a crotchet circle, then kept going round and round, increasing the chains around the widest part, and decreasing as it got narrower towards the top. The electric flex has an on/off switch half way along it so I had to put the jacket on and work round the flex. Without a switch, I could have just taken the plug off and pushed it through before it got too narrow. 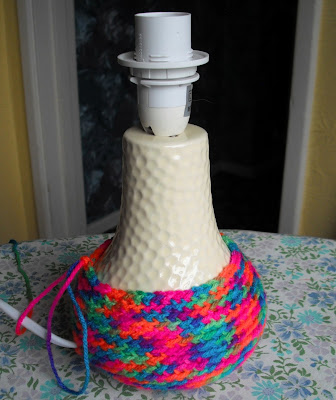 Now it has a pretty base. I have a shade but it is very old and doesn't go with it. I can either strip the fabric off and recover it, or look for another one in a charity shop. 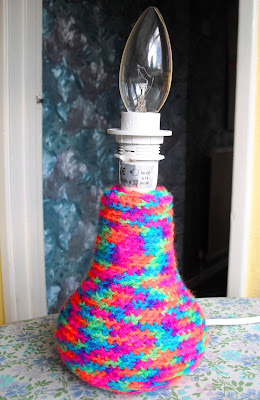 A letter arrived today, confirming that I don't need a TV licence. They contact me every two years and each time I say, still the same, with the addition that I do not watch BBC iplayer. Anyone who is giving up watching TV and tells the licensing people for the first time, will get more letters asking if they are watching. They don't give in easily and will pester for several months. I don't get any bother now. 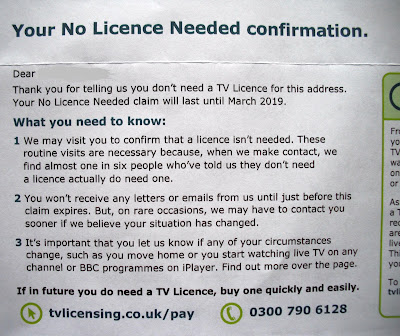 Hey, it's the weekend and the sun is out. Time to get off the computer and go out. Thanks for popping in, we'll catch up soon.
Toodle pip

PS. Note to the Walking Group. Don't forget to come back tomorrow with your mileage. Thank you.
Posted by Meanqueen at 13:53