Let's have a catch up.

Hello, I've been AWOL, apologies for my absence. Apart from not having much to say, I've been helping my friend Helen deliver her parish newsletters, and done some Bailey dog walks for Joyce, as she has needed to rest her leg. So all good stuff, lots of walking.
I didn't see the super moon the other night, but last night there was very little cloud and it lit the back garden up nicely. 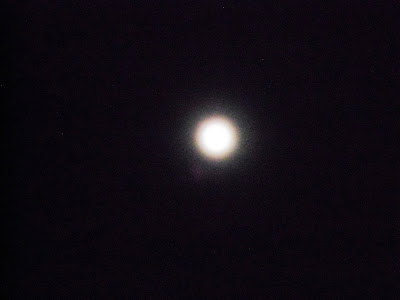 This morning it was at the front of the house at 7am, still visible, with a whisp of cloud floating by. 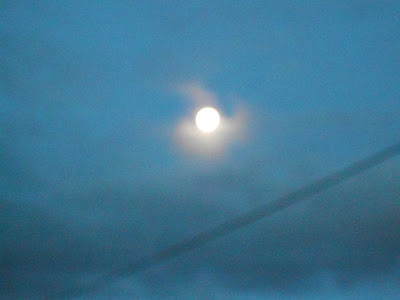 Hey, look what I found. Someone very kindly has bagged up all their spare apples and hung them on the railing for anyone to take. Thank you, I'll have one of those. 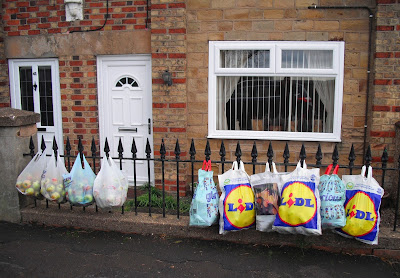 Tonight I've made a big pan of broth and vegetables. 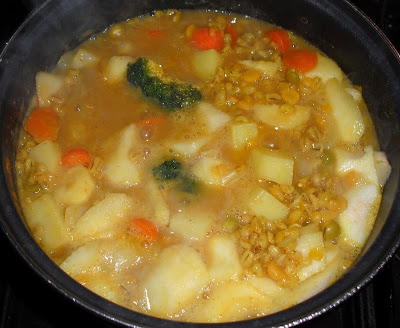 Soaked the Scotch Broth Mix overnight, and added carrots, potatoes, parsnips, an onion, the last bit of broccoli, and two apples. I used half the packet, which was as you can see 50p, it makes four large portions, or five not so large. This will put hairs on my chest, it's lovely, and very cheap. I will eat some more tomorrow, and freeze some. 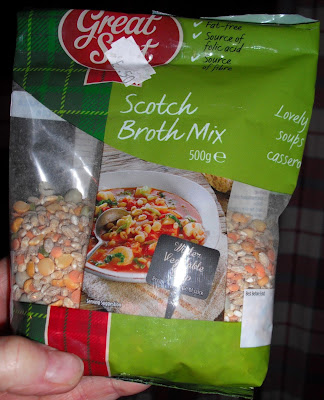 I had a phone call from a local WI group, asking me to do a frugal money saving talk. I've booked them in for January. I haven't done one for ages, it will make a nice change.

Pussy cat rescue news. Someone contacted us about a stray kitten seen wandering at a caravan park. Sue and Janet went to have a look for it, and found it in a pond. The poor little might was half dead. The man who owned the place waded in and got it out. They had it checked at the vet. Luckily we had a spare pen for it, and now it is being looked after and making progress.

There are some new exhibitions starting soon at the Arts Centre, one of them sounds really good. It's called Radical Craft, Alternative ways of making. There is a tour with the Curator on Saturday, I'll go along to that. Someone has blogged about it here.

Has anyone found the videos by Graeme Stevenson on yoootooob?  He is an artist who travels around chatting to other artists about their work. Claire Bremner produces some stunning work, and demonstrates her techniques as she talks and paints. Have a look if you are an artist, or if you aren't. She makes it look so easy.

Thanks for popping in, we'll catch up soon.
Toodle pip.