Hello. So who is going shopping and who isn't? Black, green, yellow, blue, whatever colour it is today won't tempt me to hit the shops. Mind you, I have to confess to spending a little bit in the village shop as I was passing on my walk. The new Stitch Magazine is in, and as it is only £5 every two months, I allow myself that treat. I also wanted a small bottle of milk. But that's it, no more.
From what I read in the newspapers there hasn't been long queues of people waiting for shops to open, maybe people have got wise to the big con trick, imported from across the pond. Mind you, I always say, if you have enough money and you want to spend it, go ahead, but don't go into debt by borrowing money, it's a slippery slope. I know what I can and can't afford. Watch all the panic posts coming into the MSE forum in the new year. OMG, the credit card bills have come in, I didn't realize I spent so much. No one says you have to join in with Christmas, it is not the law. I refuse to torture myself mooching around shops in a state of befuddlement, wondering what to get for auntie what's her name. I shall be putting some money into envelopes for the children in the family, and that will be it.
This cat is not my cat, he is called Mickey and he lives a few doors down. That table is a sun trap and he is often found there in the mornings. I think he has the hots for Mayze, or is it Heidi, or maybe he is on the scrounge for any spare food which happens to get thrown out. He is a naughty boy, I have caught him coming through the cat flap, a few times. He can be a bit aggressive as well, hissing when I go to stroke him, so then I shoo him off. 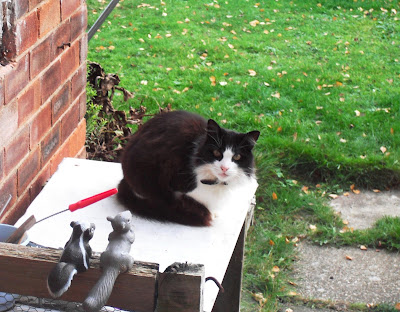 After breakfast I open the door to let my cats out, if they want to go out. It all depends on the weather. I think they sense when it is dull and miserable, so they stay in bed. This morning it was sunny, so Mayze was keen to go out. She stares at Mickey. I've never seen any fisticuffs but that look says, 'what are you doing here, get off my patch'. I think she is playing hard to get. 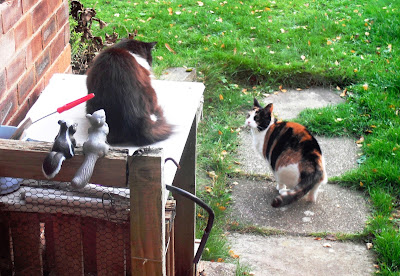 Heidi has found herself a new bed. In the evening as I am getting ready for bed, I drape my dressing gown over the banister. It must have fallen off because this is what I found this morning. Why is it that the cats always like to lie on my clothes. I hadn't the heart to move her. I will leave it there until she finds somewhere else to kip. I have three dressing gowns anyway. 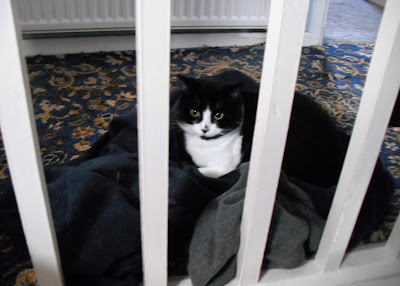 I have just had a super lunch, mushrooms, spinach, eggs, potato salad, and houmous, most of it was yellow sticker food I bought over a week ago. It is still fine to eat. I have some cauliflower, carrots, and broccoli left, which will see me through the weekend.

Hey, the sun is out, I will go into the garden for an hour or two and do some tidying. Nothing growing at the moment, just some dead stuff to collect and put in the bin.

Thanks for popping in. We'll catch up soon.
Toodle pip
Posted by Meanqueen at 14:02