Oscar knows he is better off indoors while this cold weather is freezing his nuts off, well, it would if he had any. He spends quite a lot of time lounging on the sofa, or up in the spare room where he has a blanket, or right next to me on the desk as I sit at the computer.

Mayze is a bit miffed because she thinks that is her special place. She doesn't like it when I give Oscar a cuddle, she stares daggers at me. Why are you doing that!
Oscar is very much a free spirit, and mainly an outdoor cat, but I think he is coming round to the fact that being indoors is rather nice. He gets up, goes over to the food bowls, has a nibble, and goes back to bed.
More often than not he spends the whole night indoors now. When I go to bed I leave some food out for him and it is always eaten by the next morning. He hears me getting up and stands by the back door waiting to be let out. I have shown him the litter box, scratched around in it hoping that he might realise what it's for, but he does not use it.
When he wants to come back in he stands on the table outside the back window and peers in. I wave to him and point to the door so he knows that I will open it. Clever cat. 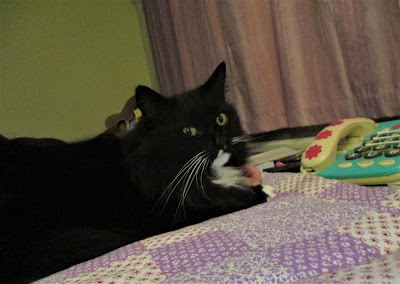 Now going out for a doggy walk.  Thanks for popping in. Catch ya soon. ilona
Posted by Meanqueen at 14:08