Bridlington is so well spread out that you don't need to see the amusement arcades and fairground rides if that is not your thing. There are plenty of other ways to enjoy the seaside experience. A walk along the very long beach when the tide is out is most pleasurable. Just watching families enjoy themselves with kids and dogs in tow makes me smile. A simple portion of chips, a bag of hot fresh donuts, or an ice cream is enough to make it a special day out. I had the chips, but not the donuts and ice cream.
This part of town was surprisingly quiet on Friday. Not many customers for the arcades. The doors were open trying to entice a few people in. 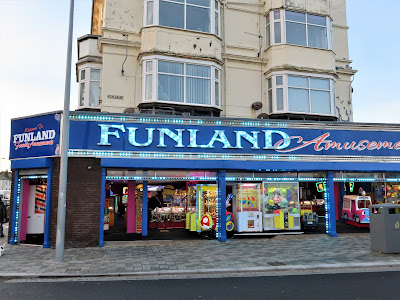 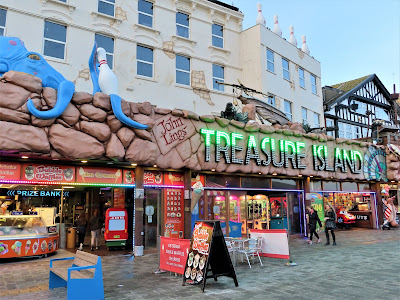 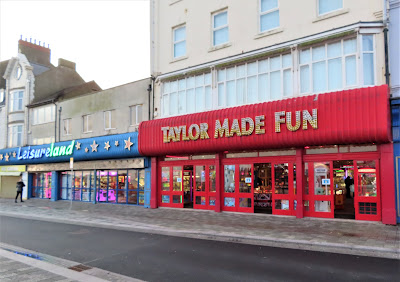 The funfair was closed, as you would expect in the middle of winter. The rides were covered up, the big wheel was motionless. 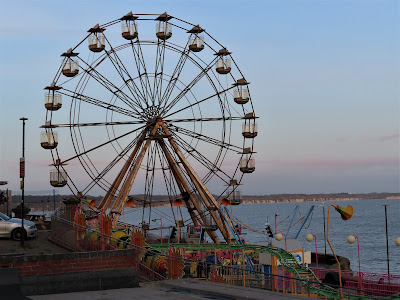 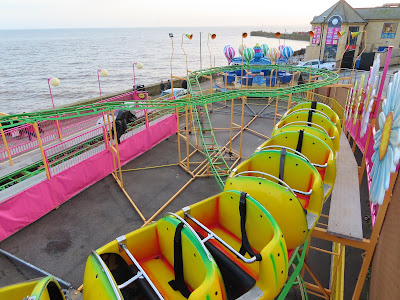 There are no barriers around the funfair so It's possible to walk through it. 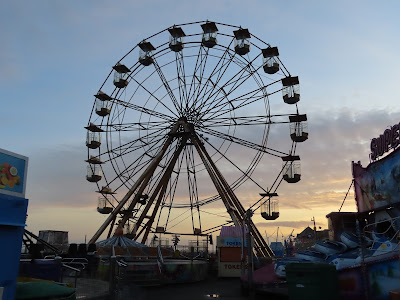 It brought back memories of when I worked on Blackpool Pleasure Beach. Back then, in the late sixties, early seventies there were no barriers, so it was possible to meander through the park even when it was closed. Now the whole thing is enclosed in security fences and there is a charge just to walk around, when it is open for business.
I worked on the waffle and donut stall, we also sold hot dogs. When I started the job it was situated at ground level opposite the entrance to the Ice Drome, on Watson Road. Later we were moved upstairs to a brand new stall opposite the entrance to the Log Flume. I often sneaked a free ride when we weren't busy.
I worked with Ada and Maura. I called Ada my Blackpool mum. Maura came over from Ireland every year for the summer season and went home in the winter at the end of October. Maura lodged with Ada when she was here. I was living in a one room bedsit.
We had a kitchen at the back of the stall where we prepared the mix for the donuts and waffles. The kitchen was also where Ada prepared and cooked our meals. We all paid into a kitty and Ada did the shopping. On busy weekends we didn't have time to leave the stall, we ate our meals one at a time, so there was always two people serving on the counter at the front. We even used a bucket to have a pee, because it was such a long traipse to the toilet. That wouldn't be allowed now, but we managed.
At the end of the day the first indication we got of the Pleasure Beach closing was that the top lights would be switched off. It was a different time different every day depending how many people were still walking about. We knew then that gave us an hour to wind things down. Half an hour later Laughing Man, the clown at the front of the Fun House, stopped laughing. The stall holders nearest to it would pass the message along the line, it spread to everyone in a few minutes.
By this time Ada had cashed up, and our machines had been switched off and cleaned ready for the next day. Only one thing left to do, when the siren blasted out over the whole Beach the shutters were pulled down, and we locked up. Usually Ada and Maura did that. Because I was the fastest runner I made my way towards the Casino building under the cover of darkness, so I would be the first to run upstairs to the office to pay in the money. I was nearly always the first, with a queue building up behind me which would take ages to clear. After paying in the cash I used to go into the Horseshoe Bar at the Casino and meet up with some friends. Watch the Cabaret and have a drink until 1am. This was the routine for six days a week.
I have fond memories of my time at Blackpool Pleasure Beach. I was there for three years. It was a summer job. I had a job for the winter at Empire Pools the football coupon people. This arrangement suited me fine. Indoors in a warm office in the winter, and outdoors on the donut stall in the summer.
I think I have rambled on a bit here, ha ha. I have a few pics of the harbour at Bridlington, I'll put them on tomorrow.
Thanks for popping in. Toodle pip.   ilona
Posted by Meanqueen at 18:13