Caistor is a nice town

Good morning world. I ran out of time last night to put this out. After a day out all I want to do is collapse in a chair and browse a few videos. Today is a fresh new day. I have to check the desk calendar to see exactly what day it is. My neighbour hasn't gone to work so it must be the weekend. Ah yes, I have a dog walk marked down for later. I fancied a drive out somewhere, so I took the back roads into Lincolnshire. The Wolds have some gentle slopes with very nice views. Quick, stop the car, snap snap. 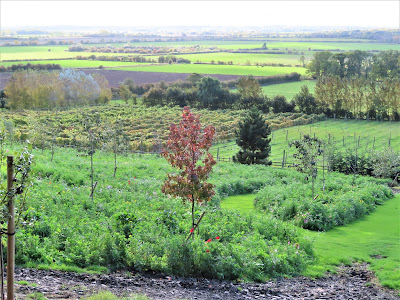 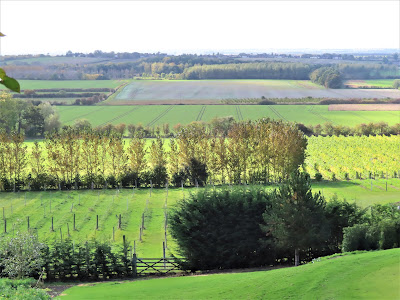 Caistor was where I was heading for. I have been here a few times, but not for a while. I sometimes use this as a place to park the car, then go off walking. This time I had a bimble around the town.
I once gave a talk at the Arts Centre. I had a look for a photo of this but sadly I didn't take any. It was April 2011. Blimey, time flies. 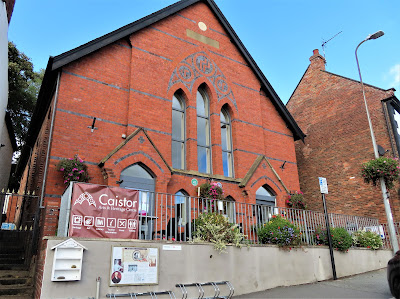 Inside there is a cafe, and a library, and an art gallery. There is lots of local information for visitors to peruse. I popped into the lavvy while I was there. Two people were checking out the leaflets for local walks. I thought, aha, walkers I think. Yep, they were. We immediately had something in common. The subject was the basis of a lengthy conversation. The lady was also a keen recycler and a make do and mend fan. That's how the conversation started. You know me, I can talk non stop for England. The bonus was, we were singing from the same song sheet, if you know what I mean. Nudge nudge wink wink. YESSSSSSS. I was very happy to meet these two people. 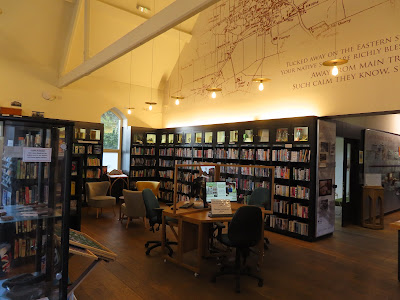 Some of the buildings in the town. 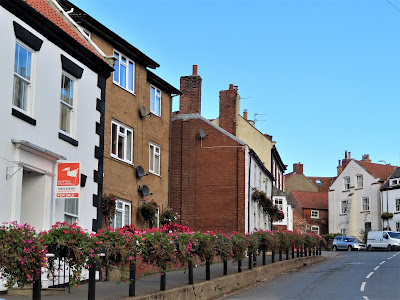 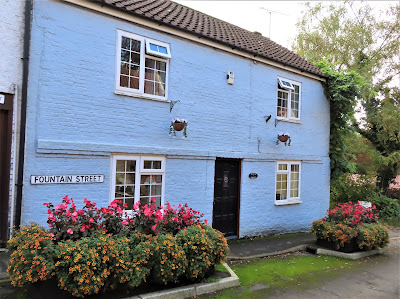 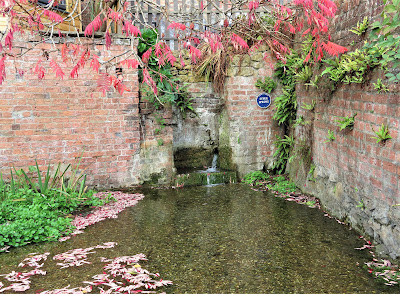 The pink house used to be a pub. 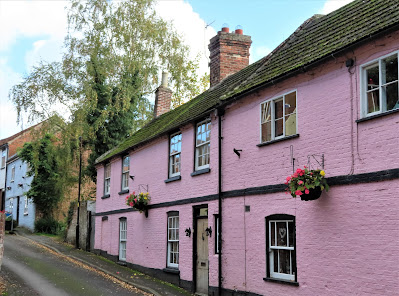 I sat on a bench in the churchyard and ate my cheese sandwich. Such a lovely view. A man passed by with two dogs. I asked if they could have a treat. He said yes, so I offered them a Pedigree Markies Mini. They sat when asked to and quickly scoffed the treat. 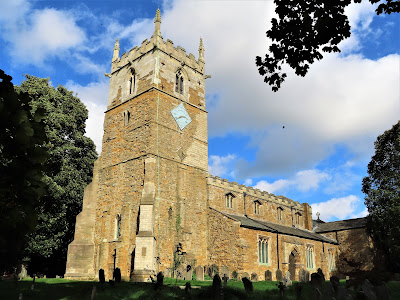 Flower display at the front of the church. 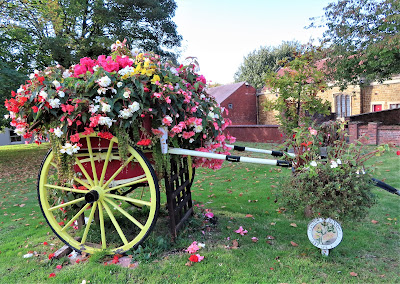 There are lots of old buildings like this one. 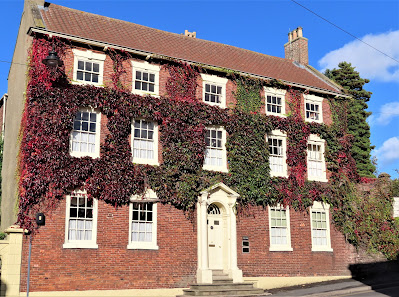 Flowers everywhere, even in October. 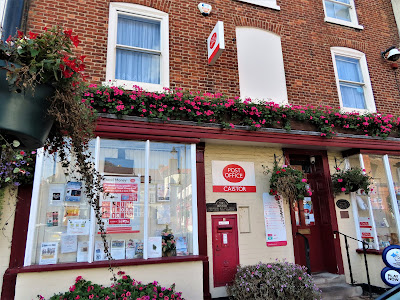 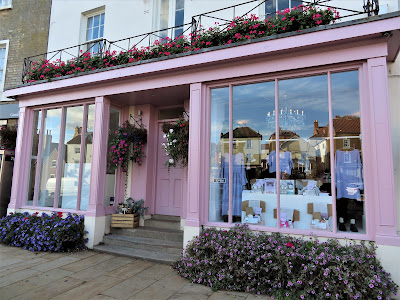 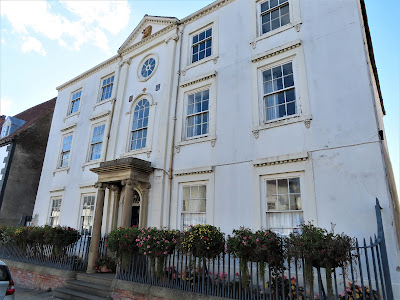 The Market Square in the centre. There was a fruit and veg stall when I arrived, but it had packed up and gone by the time I took these pictures. Two elderly gents had set up a stand offering free bible classes here. It was a bit cold to be standing about so they called it a day and went. 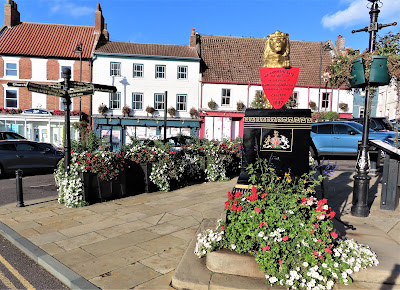 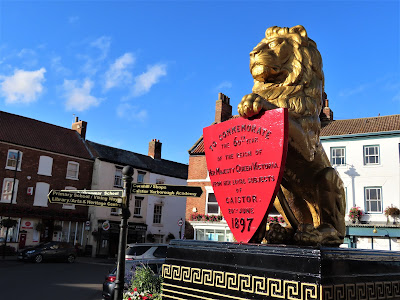 I was getting a bit cold so I moved on. I wanted to check out an abandoned house I had seen twice before, at Claxby. It was an Old Rectory. Those who have been reading for some time may remember how sad it looked. There are pictures on this post from August 2013.  And this one from January 2015.
This is what I found yesterday. Nature has claimed it back, it is probably too late to save it. The only pictures I could get were from the church next to it. 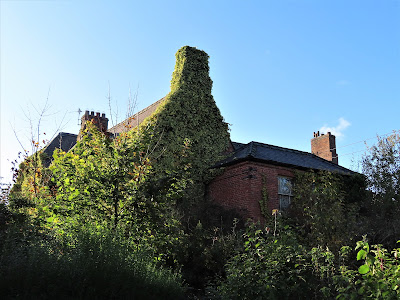 I could have probably squeezed through here which was the front gate, but it is obvious that nosey parkers are not wanted. If you look back at the two previous posts and read the comments you will see that someone contacted me who used to live there. She wanted to find out more about the house. I was also contacted by someone who didn't want anyone snooping around. I was told I was trespassing. So best to step back from this one. I would like to know what they are hiding though. Why is it hard to find any information about the house. 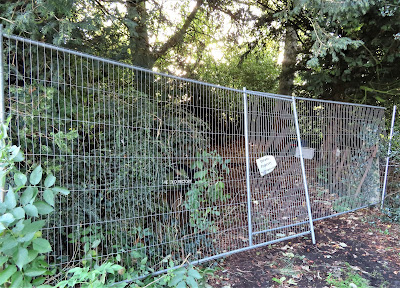 Time to head off back home. I drove through heavy rainfall for a few miles, the sun came out, and WOW. Lovely rainbow. Pull in quickly to get the shot. 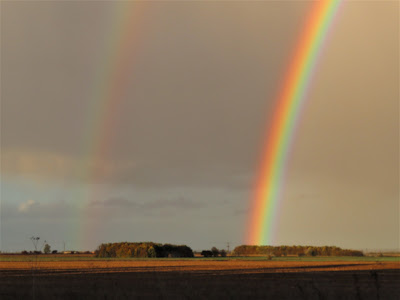 Breakfast this morning is porridge, peaches, and half a banana. Thanks for popping in. Enjoy your Sunday. Toodle pip.   ilona
Posted by Meanqueen at 10:13