I knew I was going to have difficulty extracting all the sauce from this plastic bottle, but I bought it anyway because it was cheap from the Cash and Carry, and I like garlic sauce. The idea is to stand the bottle on it's head in the fridge so the contents run to the top, which is now the bottom.

When it is time to use it, hover the bottle over the food, and squeeze until the desired amount has landed. All well and good with the first few squirts, but as the contents shrink and a mere squiggle the size of a little finger drops onto the food, followed by a puff of fresh air, a hefty bash on the worktop is needed to get things moving in the right direction.

The next stage is to give up after six bashes on the worktop only produce a lot of air and no sauce. But there's still some left in there. I got a big pair of scissors which are generally used to open awkward packaging, and cut the bottle in half. 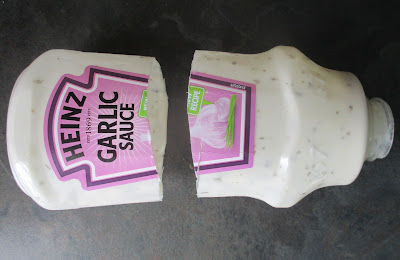 See, lots left, plenty to scoop out with a knife or spoon if you want to. I prefer to get a piece of food on my fork and wipe that around the inside then pop it straight in my mouth. 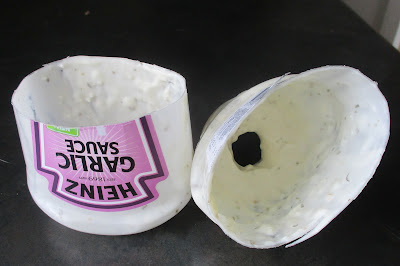 Isn't it all too much hassle. Why can't they put all sauces in a glass jar with a wide neck so you can  use a spoon to get the last bit out. Now I've had to wash this out and put it in the plastic re cycling bin.

There are so many products like this where the container is a funny shape making it difficult to scoop out the last dregs. Loads of food must get thrown away because people can't be bothered to faff around. I only get this type of product maybe two or three times a year, as a treat, because I prefer not to smother my food with sauce.

What other daft containers have you found where it's difficult to get the contents out?
Toodle pip.  ilona
Posted by Meanqueen at 15:23