Post finished on Tuesday morning.
Firstly let me apologise for this post being late. I was halfway through it last night when I looked out of the window and saw plumes of smoke rising above the houses, it was coming from round the corner in St Andrews Drive. The next thing the power went down, everything died on me. I rang Janet, her lights were working ok, I went up the road to ask Barry, and his electricity was also cut. He said the Sub Station round the corner had blown up. Aha, that's what the smoke was then.

I went to investigate, and sure enough the fire brigade were in attendance, well they stood there looking at it. Nothing they could do, they went away and we waited for the Electricity Board to come out. By then it was getting dark and you could see candles in windows. I did think about getting the laptop out, but then I remembered sitting in my car once using it when the light was fading, it is not easy to see the small keyboard. So I thought sod it, and went to bed.

So here I am bright and bushy tailed starting where I left off. I had some unfinished business to attend to, the missing miles from the long walk. I didn't feel as if I had properly finished it when I arrived at the Humber Bridge that Saturday night, and got a lift home. I didn't experience the elation as I passed the finishing line, even though it was a finishing line that I had invented, which could be moved. I felt I had let myself down by not fully completeing the task. Yes it was a great achievement, I know that now, but at the time there was an element of sadness through not quite managing my goal.

I probably shouldn't be too hard on myself but that's how I am, if I do a job I want to do it right, or not at all. But then I always say, it's better to have tried than not to have bothered at all. So there is a conflict going on there. I suppose the answer is to set more realistic goals, those which are more achievable, but then that defeats the object of pushing yourself and discovering new highs.

Anyway, what did I do yesterday. I drove to the Humber Bridge, and parked my car underneath it on the southbank. There are steps which take you up onto the bridge. So here I am setting off to walk the missing miles. 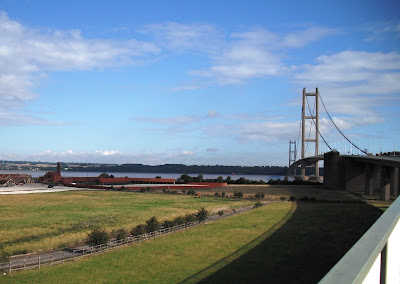 Looking down, this was an old tile works, it looks as if they are rebuilding it. I'm not sure what it is going to be, it could be a leisure complex I suppose, maybe it will remain a tile works. 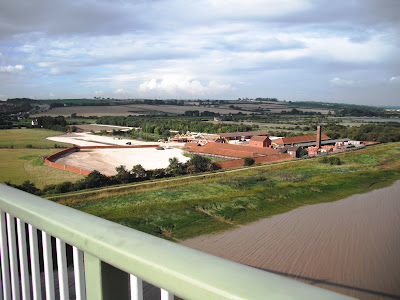 Arriving at the Toll Booths on the northbank. 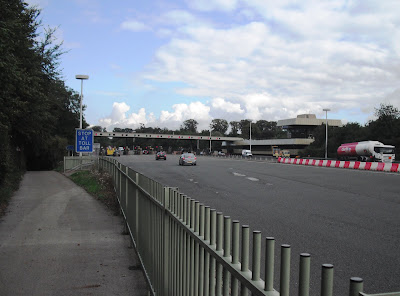 There is a short walk down to the country park, through the car park and onto the foreshore. Here are a couple of views of the bridge as I pass underneath it and head for Hull. It really is a magnificent structure. 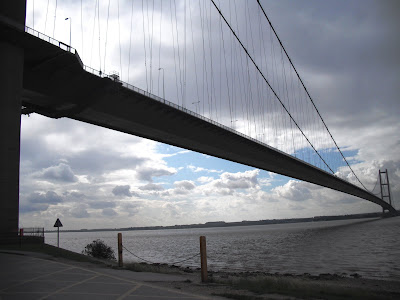 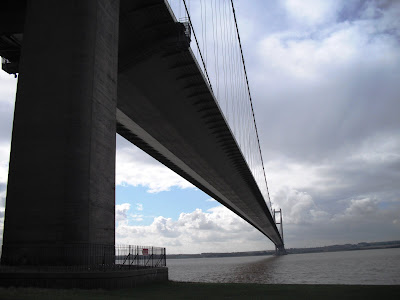 Here I pick up the Trans Pennine Trail, a national cycle track that runs from Southport in the West to Hornsea in the East. Here is the web site

The path is quite clear and well maintained at first, but then further along parts of it are quite narrow and overgrown. At one point it runs alongside the main A63 dual carriageway with only a flimsy wooden fence between you and tons of heavy metal flying past. I felt a bit vulnerable for about 20 mins, and it was a relief when the path veered off to the right away from the road towards the waters edge. I came across some blokes fishing and stopped to chat, asking if they were trying to catch something for their tea. They said no, too many crabs in the water and not enough fish.

I came to the Retail Park, ooh look, that name rings a bell, ha ha. I have done many deliveries to this place in my big orange truck. 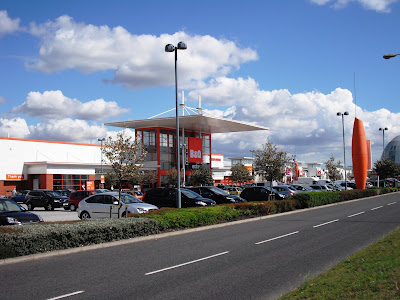 I noticed this mini truck cruising around, passing me several times, and found the driver taking a break and stretching his legs. I couldn't resist being nosey and asking him about his job. All he has to do is drive his advertising truck around busy places, that's all. Stop start all day long. No finding places to deliver, no humping boxes, no deadlines. He lives in Liverpool where the firm is based, last week he was in Brighton on the south coast, next he is going to York. He gets put up in hotels, does eight hours a day and the rest of the time he can do what he likes. Sounds like the ideal job for me, where do I apply. 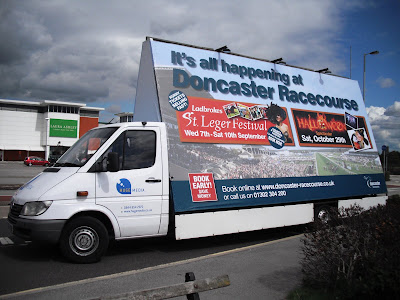 Getting towards Hull, the path suddenly disappears into a dead end, I must have missed a sign somewhere, so the easiest option is to continue along the road. Here I am arriving at the Marina. A couple of shots to prove I am at the waters edge in the city centre. 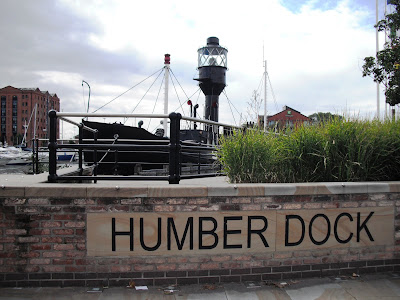 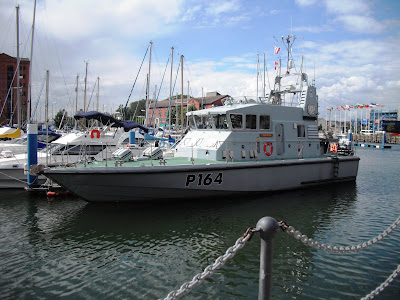 What to do next. I know, last time I was here they were advertising a David Hockney painting which was going to be exhibited at the Ferens Art Gallery. I like his work. Bigger Trees Near Warter is the biggest painting he has ever done, it is 15ft by 40ft, it took 50 canvases to complete, and he painted every one in his studio in Bridlington. There is a short video film showing how he started the project right through to the end and transporting it to the Tate Gallery. Warter is the name of a place near Pocklington in East Yorkshire, and not a mis spelling of water. If you google 'Bigger Trees Near Warter' there is a Guardian article about it. It really is amazing. 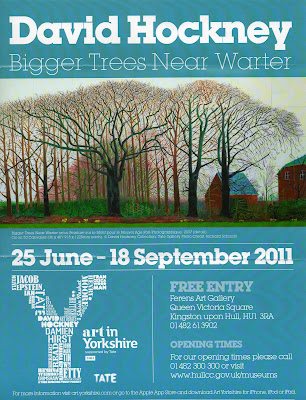 Now, I have reached my destination and completed my walk. I have two choices, walk back to the car, or get the bus back to the bridge and walk over it to my car. I think the second choice is best as I don't want to be out too late.

If I had completed this bit at the time of the walk it would have added another six miles to it. The distance over the bridge from Far Ings Road to the toll booths is 1.8 miles, so double that and with the bits around Hull added to it, it has made a walk of 11.17 miles today. That'll do nicely.

Email ThisBlogThis!Share to TwitterShare to FacebookShare to Pinterest
Labels: reflections on life, walk