I am not a fast reader. I slow right down to try and digest all the information. This is a book which can be picked up over and over again. It will be difficult to review the whole thing in one go. I am 145 pages into it so I will make a start now, and maybe come back to it later. 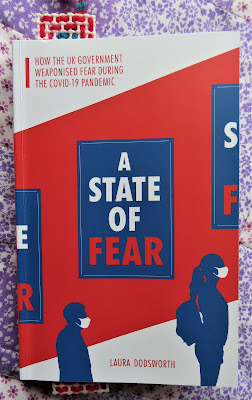 At the end of the book there are references to all the information Laura has gleaned from a myriad of web sites. Everything she has published can be verified. I will use this list later for extra information.

Chapter 9 is about coercion.  In 1956 social psychologist Albert Biderman investigated and reported on how Chinese and Korean interrogators brainwashed prisoners of war. His studies resulted in the Bidermans Chart of Coercion. Doctor Harrie Bunker Smith, a psychologist, compared some of the Governments tactics to psychological abuse. In an interview with Laura she said she sees a parallel with an abusive relationship, because she is trained in domestic abuse.

Here is a brief rundown of some of the points she makes.

Isolation. Stay at home orders, isolation from loved ones.

Fines threatened for activities which were previously normal. Threats of repeated lockdowns when compliance is not enough.

Re opening of some social and sporting activities, then taken away again.

Proclaiming that we must not act on basic human instincts, hugging family.

Shaming people for struggling to wear masks, without knowing their reasons.

Enforcing trivial demands like standing on dots in shops and following illogical rules.

Bunker Smith believes people are getting used to being controlled by the Government. A bit like domestic abuse, the goalposts are moved. You wait to be told when you are allowed, and it can be taken away from you. People in an abusive relationship get very angry when they are called out if they are not ready to hear what's going on.

This is only a tiny example of how the book digs deep. Laura has covered all aspects of the questions set out on the back cover. 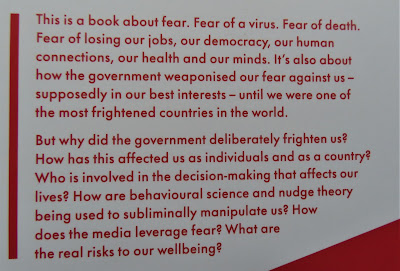 To my readers. Armed with knowledge and an understanding of what is going on might help you deal better with the situation. On the other hand you may wish to ignore what is going on, that is your choice. My impression so far. From what I have been researching on the internet, this book confirms a lot about my perception of the situation. From what I have read so far I am keen to follow it through to the end. There are still a lot of unanswered questions. I'm not sure that there ever will be an end though, I do feel that it will not be a happy one.

Now I need to go outside and water my plants. I thought it might rain overnight but it didn't. Some of them will be drooping.

Thanks for popping in. We'll catch up soon. Toodle pip.   ilona