It was a bit chilly this afternoon, but I went for a walk anyway. The tracks along the field edges were extra muddy. I don't bother washing my trousers from one walk to the next. No point when I am going to walk through mud again.
I came across a coalman doing his heave ho, getting a sack of coal on his back. He said it's ok to take a photo. He said he has been asked before, people seem to like taking photo's of him doing his job. I suppose that's because there aren't many of them about now. 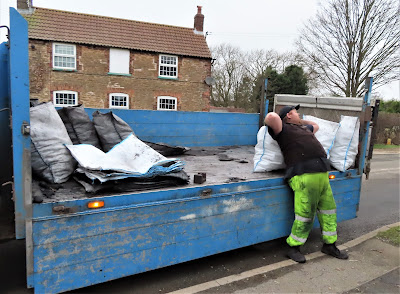 Three sacks to deliver to this customer. Good job he is a big lad. Can't see a six stone weakling doing this job. 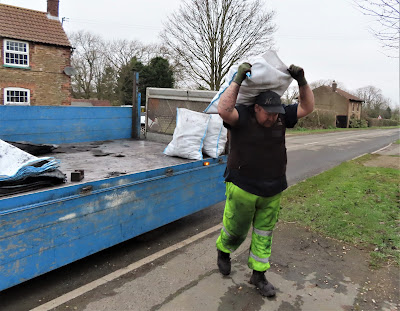 There was a woman with him, she was talking to the customer. He handed over the money and she made a note in her book. When they came out I asked her if the lad was her son. She laughed and said no. She said she was the driver. She said she is 75 and had to come out of retirement because they are short of drivers. She used to have an HGV licence but gave it up a long time ago when she had kids. If you know anybody who wants a job tell them to phone the number on the truck. 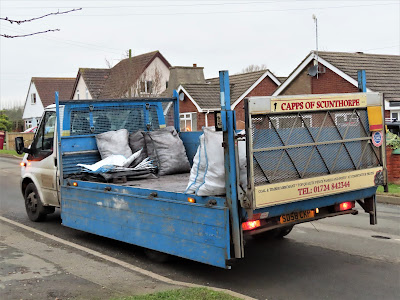 This reminded me of a story, something that happened a long time ago. We used to have coal deliveries when we lived in a council house. We had a small brick built room just outside the back door. A bit like a shed. The bags would be emptied on the concrete floor.

I must have been about eight or nine at the time. We were having Sunday dinner sat round the table. I must have said something to upset mum, can't remember what it was about. Perhaps I was cheeky. The next thing I was being dragged into the coal house, and my dinner was thrown in after me. Maybe I was complaining about the food. The door was shut and I sat crying in the dark. I think she let me out when they had all finished their dinners. I didn't get anything.

That memory has stayed with me and seeing the coalman today brought it all back. I can laugh about it now, but it wasn't funny at the time. Don't think mum was a bully, she wasn't. She just brought us up to behave properly and watch our manners.

That's all for now. I'm waiting for a video to upload then I am going to bed.