It's been raining all day. Looks like Billy is not going to get a walk. He doesn't like getting wet, and neither do I. If it stops later on I will go for him, but if not we will go out in the morning. That's if it's stopped raining by then.

In the meantime I have finished the two bags I was asked for. I don't normally do commissions, but I was ok with this. I haven't used the sewing machine for a while, and I fancied making a big bag with a lining as opposed to a single layer simple to make shopping bag. They've worked out really well.

A lot of careful measuring and cutting out to make sure the linings fit together perfectly with the outside. The sides have gussets five inches wide. The ends of the handles are enclosed between the inner and outer layers. Two rows of stitching around the top to secure them. The fabric was given to me. You may remember that a neighbour gave me lots of black bin bags full of fabric which were part of a house clearance they were doing. I still have plenty left. 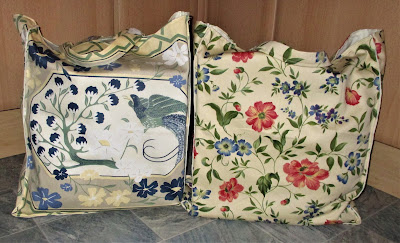 Half past four and it's dark. I prefer to go out once a day, even if it's not very far. The plan is to go to Aldi tonight, it's been three weeks since I last went.

Maze is telling me she wants food. Thanks for popping in. Catch ya soon. Toodle pip.  ilona

Email ThisBlogThis!Share to TwitterShare to FacebookShare to Pinterest
Labels: sewing