Oh dear, I am late with this today, it's been a hectic morning. I'm glad you liked the Paul O'Grady clip, someone mentioned he is an animal lover and this prompted me to find out a bit more about him. He has had quite an interesting life, travelling all over the world. He was married for a long time, but not to the mother of his daughter. He has a farm in Kent, and a flat in London. If you want to read up on him here is the site, http://www.absoluteastronomy.com/topics/Paul_O'Grady

Right, the reason for my lateness is that I went out to fetch two kittens who are in dire need of a new home. The young woman does not want them, and can no longer afford to look after them, so she says. She probably hasn't spent any money on them at all. They have fleas, and need worming, and one has diarrhoea. Janet came with me to fetch them, and it wasn't long before the yucky stink of poo wafted through the car.

When we got back the white one had her bum washed, we found worms in the poo, they were both treated for fleas with a Spot On, and both ravenously tucked into a plate of Felix. The woman said she couldn't afford to buy wet food, they have only had dry. They ate like they were starving. 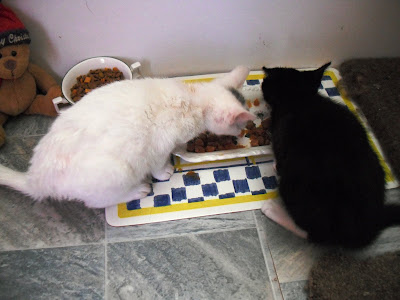 Thank goodness we got them out, who knows where they would have ended up. Aren't they just gorgeous. 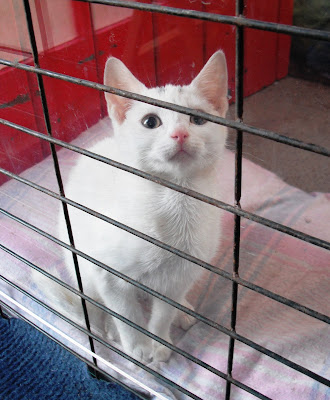 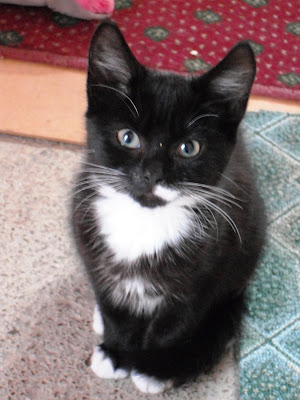 I made this delicious stew yesterday, and ate it for lunch and dinner. Potatoes and carrots from the garden. One onion, cauliflower, bulgar wheat, wholemeal pasta, last few leaves of spinach, soya mince, Quorn pieces, and spices for flavour. Yum. I'm going to perk it up with half a tin of spaghetti in tomato sauce, that will do nicely for dinner tonight. 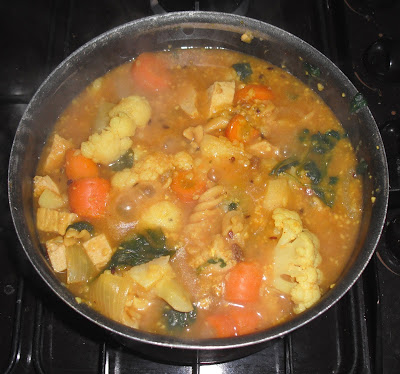 For my frugal summer fashions today I am wearing a pink sweatshirt with a floral pattern, which I found in the loft. There was three bags of clothes left by the previous owners, things that didn't fit me were taken to the charity shop. My shorts were given to me, and my sister gave me the shoes. Howzat for frugal :o) 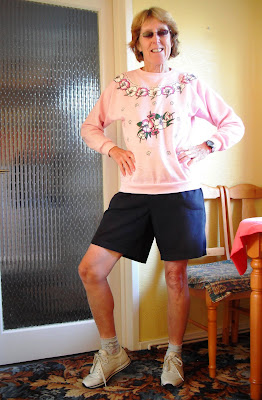 I'm wanting to get this posted quickly, so it's a short Commandment for today.Thou shalt not carry a lot of baggage around. Don't dwell on things from one day to the next. Have a clear out in your head every night, put all miserable thoughts in the trash can, dump the crap in your life, and start afresh each morning. What is worse than bumping into somebody in town or at work, and you say, 'Hi, how are you?' And they say, 'Oh, you know, things could be better if I didn't have this awful life I am burdoned with.' You wish you hadn't asked.

Think about the poor person who has to listen to your moans and groans. If you need to offload, choose a family member, or a very close friend to confide in, but don't carry that heavy baggage on your shoulders for the whole world to see. Leave it behind the front door as you step outside. In fact dump it in the bin, you don't want to come back to it later.

Here is my Larf of the day. I almost forgot the famous Laughing Man at Blackpool Pleasure Beach. The first Laughing Man was bought by Leonard Thompson, owner of the Pleasure Beach, in 1932. I used to see him every day when I worked there 43 years ago. The Beach always closed at different times, depending on how busy it was and how many people were still spending their money. The first sign of closing was Laughing Man stopped laughing. The stall holders and ride operatives nearest spread the word, and it was passed along and ten minutes later we all knew that we would be closing in one hour. The next indication of closing was that top lights were switched off on the rides, then we knew we had half an hour to wind down. At closing time a siren goes off, and shutters are pulled down and everyone rushes to the Casino building to pay in their takings. I don't think they do all that now because individual rides don't take cash any more. Laughing Man brings back memories for me.

Better late than never, I've done the draw for yesterdays raffle ticket. The winner is......Campfire. well done, a second ticket for you, number 735078. Good luck.
Posted by Meanqueen at 16:00