What happens when having a bit of fun to raise money for charity suddenly becomes offensive? Members and supporters of the Upton Rugby Club have dressed up in women's clothes and held fundraisers for a Hospice, for the last 18 years. They have raised over £40,000. Now, suddenly the Hospice have told them that their efforts cannot be promoted by the Hospice because it might offend the LGBT community.

They buy their clothes from the Hospice shop, then hand them back after the fundraising event so they can be re sold. 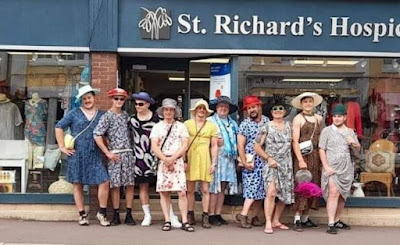 Picture source and full article here. The Rugby Club supporters have found a new charity to support, so the Hospice has lost out.

This woke business is like a virus, anybody can be offended by anything. Chubby Brown recently had an event in Sheffield cancelled because the venue owners Sheffield City Council, said they have a duty to protect the public from his smuttiness. It is a well known fact that he 'F's and 'blinds' throughout the whole time he is on stage. His act is very cutting edge, no holds barred smut, and people know what they are going to get. They can choose not to buy a ticket. Chubby has been working as a comedian for many years, I have seen him twice, live. When he is on stage he takes on the persona of a cheeky chappie who is obsessed with sex and relationships. It is purely an act. Royston Vasey is a happily married man, this is his job.

Comedians everywhere are now being silenced by those who might be offended. They are afraid to stand on a stage and take the micky, have a bit of fun, and say it like it is. Wokeness is killing humour stone dead.

I recollect the words of Katy Hopkins :-  I don't give offence, you choose to take it.

A sunny morning, I hope we have a sunny day. Time for breakfast.