On the road to Hushinish

I woke up on Friday morning at the picnic area, and it was still raining. Only me there, no one else had arrived during the night. I made a coffee and ate a couple of biscuits before I decided to move. The day was not looking very promising. I pressed the button to start the engine and a new notice appeared on the dashboard screen telling me that I can get a new battery for the key from a Ford dealer.
I knew the battery was on it's way out because there was a warning telling me this not long after I had left home. I thought well they last ages, and it wasn't about to stop working immediately. I thought it would be ok for the whole trip without any problems. Now this second notice appeared so I thought again. Maybe I should do something about it, because the further south I went the less likely I would find anyone to help me if it all went wrong and I couldn't start the car. I didn't fancy being stranded in some remote place.
Only one thing for it, back track and go to Stornoway, where there was a good chance I could find a Ford garage. I pulled into a petrol filling station, and by a stroke of luck I saw a chappie get out of his Ford car. He wasn't at the pumps so I thought he might have pulled in to go to the shop. I asked him where is the Ford garage, and he gave me directions. He wasn't Scottish so I presumed he was on holiday. He said he was from the south of England and had lived there for several years, and he likes the slow pace of life there.
I found the Ford garage, and asked if they had batteries for keys. They said they didn't stock them, but if I went to the big Motor Parts warehouse just down the road and got one, they would fit it in for me. Luckily they did have the right battery, and it was fitted. Cost £1.95, and a sigh of relief from me. So, panic over.
It meant I had to go back down the road I had just been on, and headed towards Tarbert.
There was a beach I wanted to explore, at Hushinish, so I took the right turn onto the B887 and drove for about ten miles along a very narrow and twisty road. It seemed to take ages, I thought, will I ever get there. It was probably more that ten miles.
So far along it I came across this scene, ooooh, they are building a new bridge. Anything to do with cranes and construction I am interested in. I parked and took a few photo's. 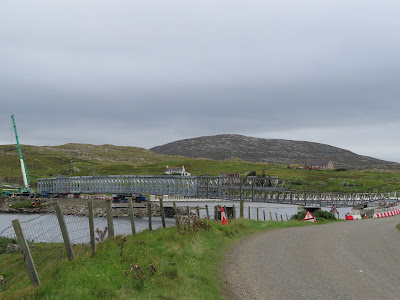 The new steel bridge was going up alongside the old white concrete bridge. 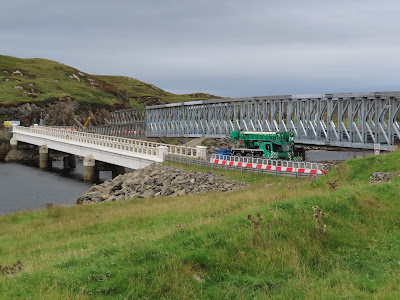 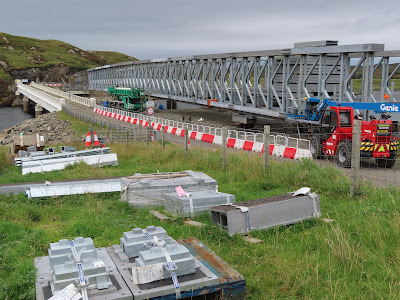 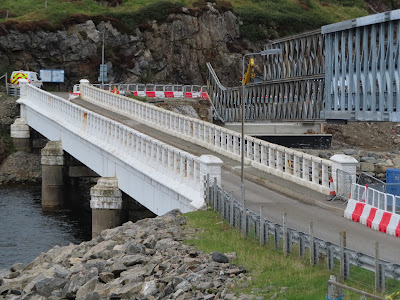 I went closer and had a chat with the workers. This size of bridge is sometimes built in a factory, and moved to the site by heavy haulage vehicles. That's not possible here on these narrow roads. 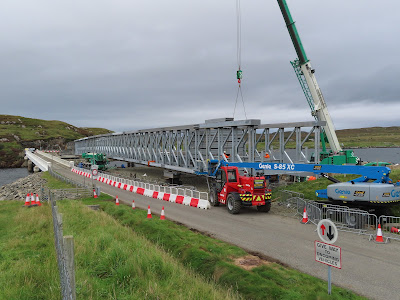 A stack of steel girders waiting to be bolted onto the structure. I asked how long it would take for the job to be completed. They said thirteen weeks. The company had rented a house for them to live in while they did the job. Then cheeky me said, oh I am looking for a place to camp, are you having a party tonight. They laughed, I laughed, can't resist having a bit of banter. 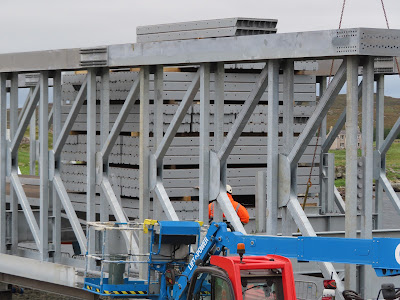 I carried on down the long and winding road. Plenty of waterfalls. 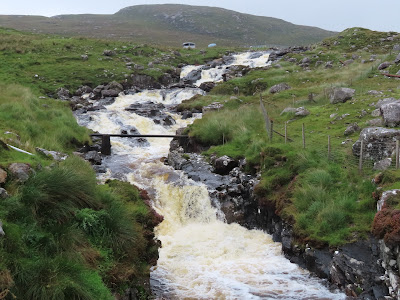 Had to laugh at this. Where is that blessed bus, I want to go to town. 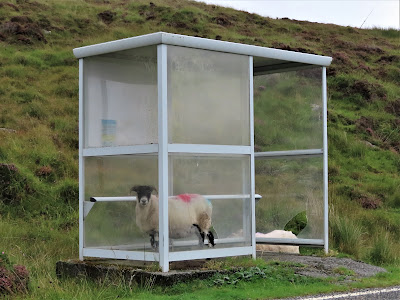 I didn't expect to see a gate on a public road. This looks interesting. I will take a photo on the way back. 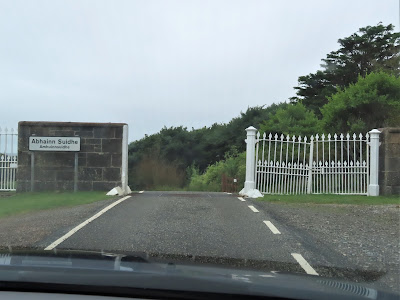 Cows and sheep roam free in these parts. 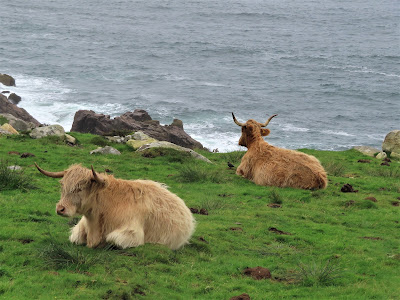 I can see the beach. 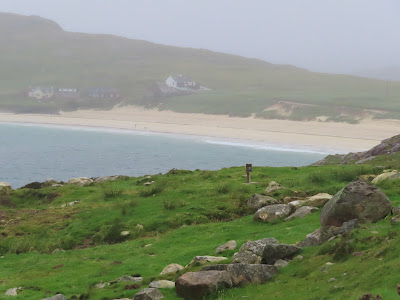 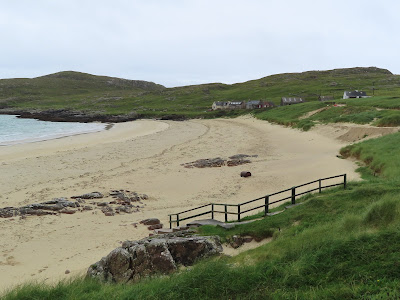 Brrrrr, it's flippin cold. Never mind, I went for a walk. 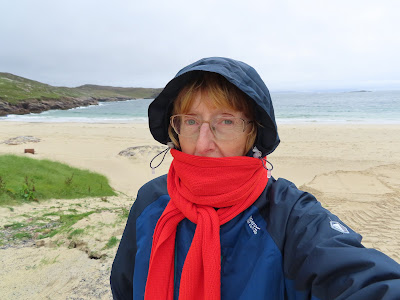 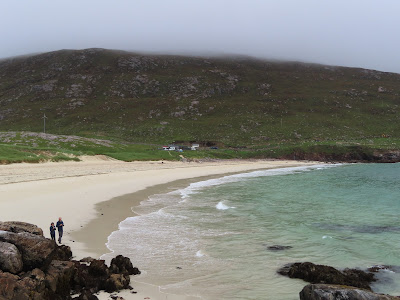 On the way back I stopped to photograph this building which I drove past when I went through the gates. Looks rather grand. Don't know what it is. A hotel I think, but no one about. 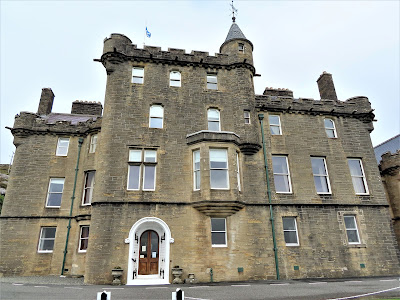 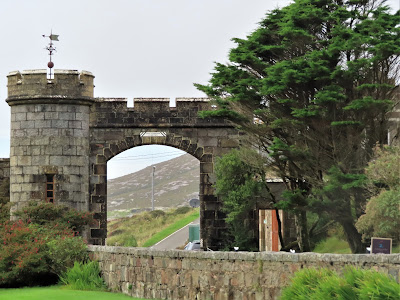 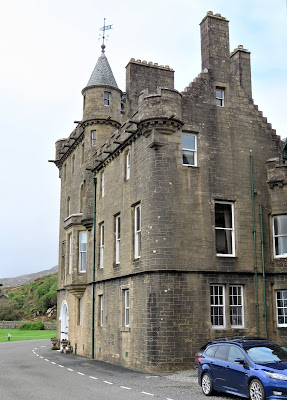 Lovely views again. Liking the zoom on this camera. 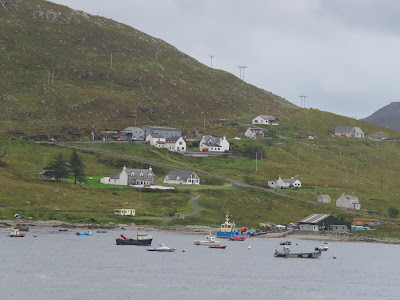 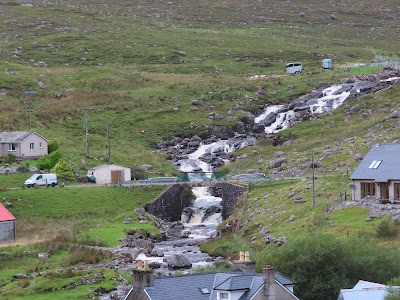 Then I was back in Tarbert and had a look around there. It's quite a small town. I watched the CalMac ferry come in, and go out again. 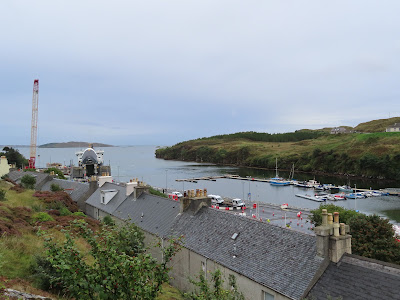 Then I needed to find somewhere to camp for the night, and carried on a bit further and came across Horgabost Camp Site. Just the job. Facilities, and next to the beach. I went a short walk before bed time.
Thanks for popping in. More next time. What did I do next. Toodle pip.   ilona
Posted by Meanqueen at 18:18